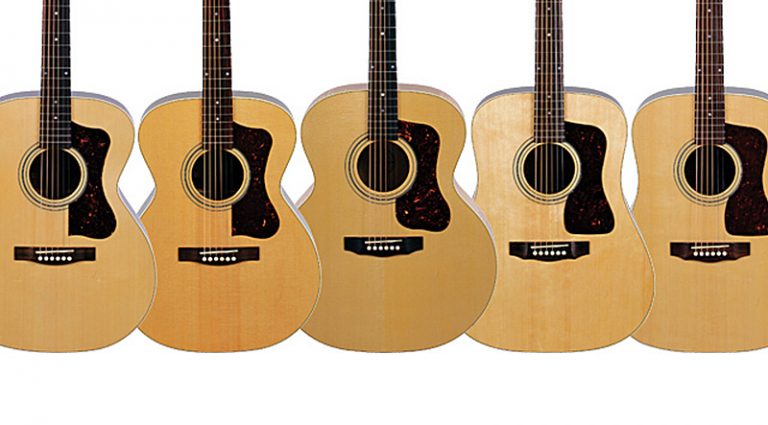 Founded by a jazz guitarist as jazz-box builder, the Guild company also built a solid reputation with its ’50s acoustic guitars. The brand’s profile as an acoustic builder was certainly given a you-can’t-put-a-price-on-that bit of exposure when Richie Havens hammered on a D-40 in front of 400,000 people at Woodstock! Another unforgettable Guild gig was Stevie Ray Vaughan ripping through “Rude Mood” while playing a JF-65-12 (that’s right, a 12-string!) on an early episode of MTV’s “Unplugged.”

Guild hopes to continue that legacy with its new Standard Series – six guitars that offer strong traditional options that aim at the heart of what most acoustic players seek in a guitar. All six have Sitka-spruce tops and Red-spruce bracing, and 12″-radius fretboards with dot inlays on a 25 1/2″-scale neck. The line consists of the small-bodied F30 (mahogany back and sides) and F30R (rosewood back and sides), the square-shoulder dreadnought D-40 (mahogany) and D-50 (rosewood), and two jumbo models, the all-maple F50, and the mahogany F-212XL 12-string jumbo (which isn’t reviewed here).

The Standard F30’s dimensions are similar to a mini-jumbo, with a slightly wider body, making them compact yet giving them room-filling tone that’s especially good for lead playing and fingerstyle. Both react well to fast-picked lines and percussive strumming, in particular. Their tone is slightly boxy, but in a hip/parlor-guitar way.

The mahogany and rosewood versions of the F30 are very different. The F30 is more even in tone and has a pronounced midrange that makes arpeggios sound very fluid. The F30R, on the other hand, has a more commanding presence; its rosewood back and sides give it a fuller low-end with a bit more treble. It works well for strummed rhythm parts and full-band playing.

The D40 and D50 offer much the same story. Being dreadnoughts, they offer plenty of classic acoustic-guitar tone, and the D40 renders it evenly, but with more-pronounced midrange. Typically, mahogany instruments are not quite as loud as rosewood, but there’s something about the D40 that made it stand and deliver; it was arguably the overall best-sounding instrument for the player who accompanies a vocalist or needs it for solo work. It can get slightly lost, volume-wise, but its tone is very impressive.

The D50 is, simply put, beefy. This is the strumming machine of the batch. With a sound warm and deep, its low-end is pronounced without being overly boomy and it projects almost as if it’s amplified.

The jumbo F50 earns its ranking as the flagship of the series. An absolute cannon, it’s somewhat addicting to play; its tone blossoms quickly and its nuances are obvious. Particularly cool is that it has all the positives of a maple jumbo without most of the negatives. Maple guitars tend to favor low-end response to the point of being “boomy,” which can pose a feedback-fighting challenge in a live setting. But the F50’s low-end is much tighter, so it excels at fingerstyle arpeggios and is crazy loud, making it perfect for coffee shops and house concerts.

Guild’s Standard Series each have their own personality, much like a vintage acoustic. They represent the company’s heritage in fine fashion.