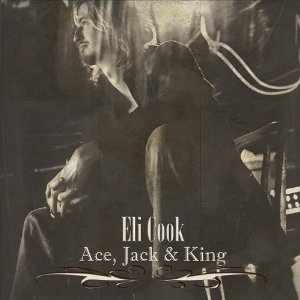 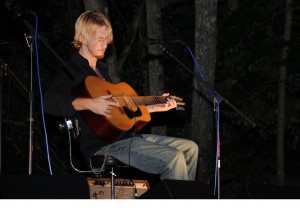 As music evolves and grows, it sometimes hits roadblocks. That has been a problem in the past with the blues. Eli Cook’s latest album takes a stab at helping the music evolve. It’s not an earth-shattering turn by any means. Any fan of the blues will recognize the patterns and the structures of the songs. But, at 25, Cook has been inﬂuenced enough by bands like Metallica and Rage Against the Machine to let a little bit of that seep in.

Most of the songs on Ace, Jack & King are trio tunes that appear simple but have some complex, layered guitar parts. From the feedbackdriven guitar that opens “Death Rattle” to the overdriven harp that kicks off shortly after, it’s easy to see this isn’t your father’s blues. But the heavy backbeat and menacing guitar are ﬁrmly in the blues pocket. When the song is reprised as the last song on the disc, it takes on a more sinister tone with metal-esque guitars and the only straight rock solo on the record. In between, Cook shows in original tunes like the acoustic “Better Man,” with its descending chord pattern and slinky slide, and “Draggin’ My Dogs,” a bouncy folk-blues with more slide and even mandolin, that he understands the idiom inside and out. “Snake Charm” is the kind of tune that helps put the evolution in plain sight. A throaty vocal matches the crunchy guitars that lean as much toward metal as they do blues. A harp solo and some wahwah added to Cook’s guitar solo tie the whole thing together.

His choice of covers is pretty standard, but the way he delivers them is not. The Charles Brown classic “Driftin’” gets a pounding Chicago blues makeover with great slide and harp. An old timey “Cocaine Blues” lets him show his ﬁngerpicking abilities, helped by a “telephone” effect on his vocal. Skip James’ “Crowjane” starts with a wildly distorted guitar sound and moves onto a heavy feel with guitar and harp that James never could have envisioned.

Artists often talk about the blues as a living and growing thing and not just a style of music ﬁt for museums. Cook puts that theory into practice and moves things forward.