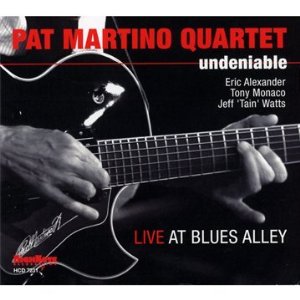 Martino has been recording for almost 50 years, originally as sideman to such funk-jazz greats as saxophonist Willis “Gator” Jackson and organists Brother Jack McDuff, Richard “Groove” Holmes, Don Patterson, and Trudy Pitts. When he began leading his own sessions, ﬁrst with 1967’s El Hombre, he delved into Middle Eastern modes, unorthodox time signatures, and fusion while still referencing his mix of hard bop and funk (what’s now called “acid jazz”) and paying homage to his biggest inﬂuence, Wes Montgomery – literally, with 1972’s The Visit, later reissued as Footprints (get it).

He opens this live date at Washington D.C.’s Blues Alley with “Lean Years” (an original that appeared on Martino’s second album as a leader, 1967’s Strings!), playing a simple, bluesy head in tandem with saxophonist Eric Alexander. When he launches into chorus after dazzling solo chorus, it’s obvious that the guitarist (born in ’43) hasn’t lost a step. Meanwhile, his quartet (rounded out by organist Tony Monaco and drummer Jeff “Tain” Watts) nudges him onward and upward, and vice versa.

Five more originals give Martino and his mates ample soloing space, which Martino takes full advantage of, employing unpredictable twists and turns before hanging on one pull-off riff then ending with well-placed octaves on “Inside Out,” a blues that recalls another Philadelphian, pianist Bobby Timmons. The set’s only cover is a beautiful rendition of Thelonius Monk’s minor-key classic, “’Round Midnight.”

HighNote’s engineers are to be commended for putting the listener smack dab in the middle of the club experience and capturing the round tone, clear but warm, Martino gets from his Benedetto signature model archtop.