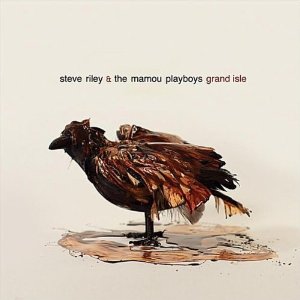 You needn’t push Play to realize this is not your typical Cajun album. The cover photograph shows a bird encased in oily sludge. Inside, next to the date April 20, 2010 are the words “4.9 million barrels.” There is no need to ask, let alone answer, “Barrels of what?” And the CD’s title refers to the Louisiana town whose livelihood evaporated as balls of tar soiled its beaches in the wake
of last year’s catastrophic BP oil spill.

Riley has been playing accordion for 27 of his 40 years, including three years with the legendary Dewey Balfa. With his Mamou Playboys, Riley has blended Cajun and zydeco to make some of the best albums to come out of Louisiana in the past two decades. Proven masters of the traditional, the band took a bold leap with Bayou Ruler (’98) and Happy Town (’01), enlisting producer C.C. Adcock, Riley’s buddy since high school in Lafayette, to stir the sonic pot. But for Bon Reve, the Playboys returned to the traditional repertoire.

Grand Isle reinstates Adcock behind the board and pushes the envelope sonically and thematically. Fiddler David Greely bites off the words to “Too Much” with almost punk defiance, while the band churns out an infectious two-step – Sam Broussard’s guitar solo skipping over the top. Riley’s “This Is The Time For Change” is another example of what Greely calls “survivor joy,” finding hope and even celebration in the face of tragedy – be it Katrina, Rita, or BP. An uplifting schoolgirl chorus rides over a loping ska rhythm while Broussard turns in a squawky solo that is simultaneously graceful and gnarly.

On “Pierre,” Broussard turns a slave poem into a hypnotic mix of homemade percussion, murmured chants, and slide guitar. Adcock’s description of the song – “simple, elegant, powerful” – holds true for the whole album.