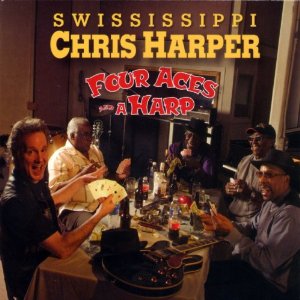 It’s not often the man who starts a record label is featured on one of its first releases, but that’s the case with Chris Harper. And when you’re backed by players like Jimmy Burns, John Primer, Willie “Big Eyes” Smith, and Bob Stroger, things will likely turn out alright, musically.

The guitars of Primer and Burns cook on the acoustic stomp of “Down In the Bottom” and the slow blues of “I Smell Trouble.” Both supply vocals full of soul and feeling. Primer’s guitar and vocal carry the boogie of “Mojo Hand” and the flying country-blues of “Digging My Potatoes,” while Burns’ slinky guitar and wonderful vocal shine on “Hand Me Down My Cane.” Harper’s vocals aren’t as strong, but his harp playing is top-notch.

Four Aces and a Harp doesn’t break new ground, but it’s full of soulful, energetic performances where the players simply have a great time making music.