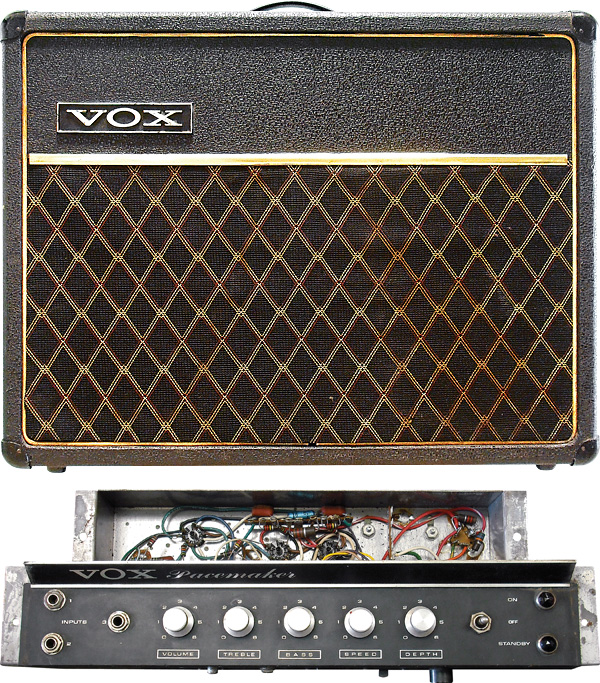 No doubt the mere appearance of that Vox logo and the diamond grillecloth beneath it has already set your heart palpitating. Let us add that this is indeed a genuine Vox combo from 1965 with two EL84 output tubes and an EZ81 rectifier, then top it off with the news that we found this amp for sale in excellent, all-original condition at one of our favorite local hole-in-the-wall guitar stores with a price tag listing $499. Ready for the defibrillator yet?

But before we charge up the paddles and shout “clear!,” we can probably bring you back down to earth with the addendum that this is not, in fact, the British-made Vox AC15 over which you were already beginning to salivate mentally, but a U.S.-made Vox Pacemaker V-3, manufactured in California by Thomas Organ. And although that price is perhaps toward the bargain end of the spectrum for these amps, it’s well within the expected range.

The Vox logo’s transition from British glory to Californian infamy is still something of a mystery to many amp-o-philes, and the real story tells a rather tragic tale. After signing a distribution deal with Vox manufacturer JMI in 1964, Thomas Organ found itself – in the wake of The Beatles’ massive success – unable to meet demand for British JMI-made Vox amplifiers. To speed the flow, in early ’65 JMI started shipping only parts (completed chassis and speakers rather than complete amps) to Thomas Organ. Even then, the California company couldn’t meet demand, and began sourcing parts to assemble its own renditions. As the snowball tumbled further, there ensued what amounted to a hostile takeover of Vox/JMI by Thomas Organ. According to Vox Amplifiers: The JMI Years by Jim Elyea (as told to Elyea by former Vox executive Reg Clark), the previous year, JMI founder Tom Jennings sold his controlling interest in the company in order to meet the need for break-neck expansion, and when Thomas Organ asked for the rights to use the Vox name in North American, Jennings, despite his vehement objections, was unable to stop the deal from going through. The result was a range of amps like this late ’65 Pacemaker, a sheep in wolf’s clothing, with no real connection to the grand roots of the brand other than the name and the grillecloth.

For all that, this is still a rare amp, and a piece of rock-and-roll history. The Pacemaker segued through several variations from its introduction in 1965 until its demise around ’71, but the tube version – as we have here – was only produced in ’65, perhaps into early ’66. The first rendition was fitted with 10″ Celestion speakers, initially sold to Thomas Organ by JMI, then purchased directly from Celestion once the Californians figured out it would be cheaper to bypass the middle man. Our rendition of the amp from later in the year had the gold Vox Bulldog 10″ speaker made by Oxford in Chicago, which also supplied Fender and several other manufacturers.

We can already see it’s a smaller amp than the JMI-built AC15 – a 1×10″ combo rather than a 1×12″ or 2×12″ – and, other than in the two-EL84 and EZ81 output-tube and rectifier complement, the Pacemaker really is different in just about every way. It has three inputs, but only one channel, powered by half an ECC83 dual-triode (a.k.a. 12AX7) rather than the EF86 pentode that served as the beating heart of the British classic. The Pacemaker does benefit from an active “cathode-follower” tone stack that’s not unlike the Top Boost circuit of the AC30, with Treble and Bass controls, powered by a second ECC83. But it uses a much cruder phase inverter circuit, the cathodyne or “split-phase” inverter more familiar from many smaller and mid-sized tweed Fender amps and requiring only half a tube, rather than the elegant long-tailed pair of the AC15 and most large amps post-1960. Another ECC83 powers its tremolo effect, with Speed and Depth controls. One surprise bonus though; our Pacemaker stands replete with a full set of Mullard tubes, the bottles it was born with (Thomas Organ must have bought a big box of these and was still feeding off them). And bonus number two: it really sounds pretty damn good, even if it’s no AC15 (and would sound significantly better through a decent 12″ speaker).

Despite Tom Jennings’ objections to Thomas Organ taking over the manufacturing reins, it transpires – according to Elyea’s book – that Thomas sent prototypes of these tube models to JMI for evaluation by the British engineers, and modified them according to notes supplied after such testing. Furthermore, JMI chief engineer Dick Denney even visited Thomas Organ’s California factory to test the post-modification Pacemaker (and others) and offer further comments and final approval (kind of like dancing on your own grave, eh?). That said, the guts of this Pacemaker look nothing like the inside of a JMI chassis of the same era. Built rather minimalistically – almost crudely – on a series of scattered individual tag strips, the Pacemaker looks more like the work of several other C-list brands. And yet, it functions just fine.

The Pacemaker’s bigger sibling from Thomas Organ, the Cambridge Reverb V-3, has a very similar circuit and tube complement, but uses the more virtuous long-tailed-pair PI for greater headroom and fidelity.

In ’66, Thomas Organ replaced the all-tube V-3 with the all-transistor V-1021 Pacemaker, one of the solidstate amps that led thousands of young Beatles wannabes in the U.S. to exclaim, “Why the hell don’t I sound like George and John through this thing!” Nevertheless, adding insult to injury, the transistorized ’66 Pacemaker cost a full $20 more than its tube predecessor of ’65, at $149.95.

Crank up the Pacemaker V-3, though, and it has that crisp, slightly glassy EL84 sizzle and crunch that does at least hint at an AC15 (as virtually every two-EL84-based amp does at times), and plenty of juicy sag when you push it. With the right guitar and the right attitude, it can almost tease out an accurate “Day Tripper,” “I’m Down,” or “Ticket to Ride” tone… or at least something better than your buddy in the garage down the road is getting with his ’66 model.