Okay, Zep police, sound the alarm and prepare to loose the hounds – we are finally about to lift the lid on the Jimmy Page amp. Well, maybe not the Jimmy Page amp, but almost certainly a Jimmy Page amp, and even this claim should be enough to get the keys clacking and the internet forums buzzing with the vitriolic denials of naysayers and Page obsessives who have already put their money on other Supros occasionally believed to have been the source of that sweet, addictive crunch on Led Zeppelin I and elsewhere. Sorry, but if the scant evidence points anywhere, it points here – given J.P.’s difficult-to-trace yet widely accepted past statements that it was a “small, blue Supro” and a “1×12 combo” – and we say that with the firm convictions of claim-stakers who understand deep down that there really is no knowing, and that we could be just as wrong as we hope we are right. Which is to say, totally.

So much for the furor, because ultimately it doesn’t matter anyway. Even if no name artist ever played through a sweet little mid-’60s Supro Model 24 like this one (even though he did), it’s still one of the hippest looking and coolest sounding 45-year-old tube combos on the planet. Right through the years of Fender’s seeming dominance of amp design in the U.S., Valco designed and manufactured a broad range of amps for re-branders such as Supro, Oahu, Gretsch, and Airline that totally disregarded the Fender standard. They all did their own thing, and did it very well. Components were largely of a slightly lesser standard, and cabinetry (which varied from brand to brand) was occasionally thinner and lighter-weight than that used by Fender and Gibson, but the circuit designs themselves are difficult to fault, and often took clever, original twists that today yield several truly stunning vintage-vibed voices that are quite different from the norm.

A look inside the chassis of the Model 24 reveals what, at first glance, looks like a rat’s nest of wiring strung out along a series of terminal strips. Look a little closer, though, and you’ll see fairly tidy workmanship, and a neat logic to the design. Valco managed to fit a simple yet extremely effective circuit into a confined space, and string together a series of stages out of the tube-design handbooks of the day that work together to pump out exemplary guitar tones. 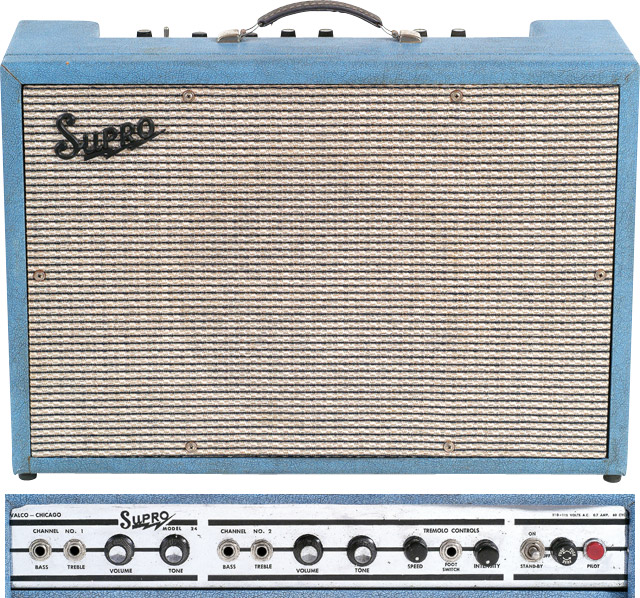 One of the surprises in here is the extensive use of ceramic disk coupling caps where you’d normally see larger, more robust axial (tubular) coupling caps in amps wearing more prominent brand names. The relatively low voltages found in several stages of the amp, however, allow such caps to thrive, while also giving the amp’s tone a thick, chocolatey, slightly gritty character you don’t hear elsewhere. At lower volumes this adds some body to the stew, and cranked up to crunch gives the Supro’s voice a meaty bite.

Another of what today’s marketing men might call the “unique selling points” of this amp is its pair of 6973 output tubes. We addressed these briefly while featuring a Valco-made 1963 Gretsch 6156 Playboy combo (February ’09 issue), but they’re worth revisiting here. This tube’s nine-pin layout and tall, narrow bottle leads plenty of people to make the assumption it “sounds like an EL84,” but that’s a long way from accurate. Even on paper – physical appearances aside – the 6973 is a very different tube, with maximum plate voltage ratings of around 440 volts DC compared to the EL84’s 350 volts, a different pin-out, and different bias requirements. The robustness of this tube implies you can get a little more juice out of it if you try, and that’s certainly the case. These tubes were favored by jukebox manufacturers of the ’50s and ’60s for their firm, bold response, although few (if any) guitar amps tapped them for all they were worth. In our Supro, they put out about 18 watts from well under 350 volts at the plates, and sound round, chunky, and, if slightly dark – crisply and pleasantly so. And how’s this for a 6973 vs. EL84 A/B test?

Curious about this tube after digging that little Gretsch 6156 a while back, we decided to try something funky; having just completed a home-brewed amp designed along the lines of a modified/slightly hot-rodded AC15 – a project that was sounding stellar just as it stood with its pair of EL84s – we decided to take a leap of faith and rewire and re-bias the output stage for 6973s. The result? The amp was instantly louder, chunkier, and just bigger-sounding, with firmer lows and a meaty, if not overcooked, midrange. Different tubes, different sound.

The Supro Model 24 is likewise capable of pumping out a surprising amount of volume for its size; anyone with a recently acquired original example that seems wimpy or anemic in that department should look to the tubes, filter caps, and/or speaker, and expect the amp, in good condition, to have a bolder voice than the average tweed Deluxe, for example, and its thin 5/8″ pine cab makes it extremely lively and resonant along with it.

Where some smaller Valcos carrying similar circuitry have scaled-back tremolos, governed by a “speed” knob only, and an extremely deep, choppy effect as a result, the Model 24 has both speed and intensity, and can be made to sound superb at a wide range of settings, from gentle pulse to swampy throb. Each of two similar channels carries an independent tone knob (the usual simple treble-bleed circuit, but effective), along with inputs marked “Treble” and “Bass.” Counterintuitive though it might seem, the Bass input sounds better for most guitar applications, tapping the full voice of the amp, while the Treble option is a bit thin and anemic.

And lest we ignore one superficial but significant factor… man, what a looker! Our featured example, courtesy of Elderly Instruments’ repair tech Steve Olson, is resplendent in Calypso Blue vinyl (which matched the finish on many Supro Super Seven guitars and other models). It was also available in red and, at other times, the more familiar gray. The single Jensen C12Q sounds just right with this amp, or you can Brit it up some and add a little volume and low end in the process with something like a Celestion G12H-30 or an Austin Speaker Works KTS-70 (be sure to box up the original for safe-keeping). Come to think of it, we wish Jimmy Page hadn’t played this amp. Then there would probably be more of them around, for less money, for the rest of us to snatch up.