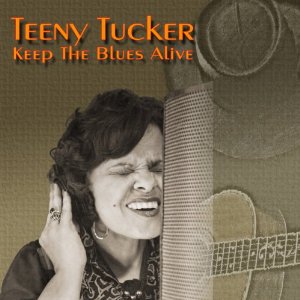 The daughter of Tommy Tucker (of “Hi-Heel Sneakers” fame) has been playing the blues circuit for years. As a vocalist, she has made a name for herself with her brassy delivery and original lyrics.

All of that is featured on her latest release, with cuts like “Ain’t That the Blues” and its tale of woe. “Keep the Blues Alive” and “Respect Me and the Blues” talk about the history of the blues and what it means, as does the brilliant “John Cephas.”

Tucker’s cohort is guitarist Robert Hughes, who is skilled in all aspects of the blues. When a song needs slinky fills or big solos, he supplies them. When a gospel-tinged song calls for a melodic solo with a tough sound, he’s there. Shuffles with jazz turnarounds are no problem. A funky, almost disco-tinged tune gives Hughes the chance to play a pinched note solo that fits the music perfectly. On at least two cuts, he supplies perfect acoustic country-blues accompaniment for Tucker’s soulful vocals. And while his solos are always on the money, his support of the vocals with fills is uncanny.

While Tucker’s songs at times plead for the blues to live on, that shouldn’t be a problem with singers like her and players like Hughes, who so fully understand the music.