- Advertisement -
Home Music Coco Montoya – I Want It All Back 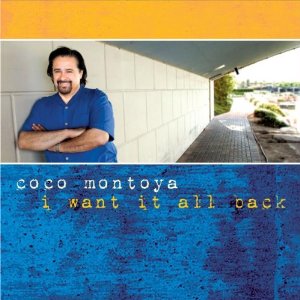 Fans familiar with Coco Montoya’s blistering guitar work and gruff vocals are in for a surprise when they hear I Want It All Back, on which Montoya serves up music tilted to traditional soul. The formula works well on this set, made up of excellent covers except for an original blues shuffle by Montoya.

While his music has always been full of soul, it’s never had the great chord changes, subtle guitar, and fine vocals offered here by “The One Who Really Loves You.” The maturity and subtlety of the cut, like many others on the disc, are the hallmarks of a musician realizing that less is more. But that doesn’t mean Montoya sounds content on the track; the solo out is long and pokes around areas some guitarists would bulldoze through. The sound of the instrument is a bit different for Montoya – pure and big – but maintains a quiet feel that adds to the flavor of each song. And there’s plenty of fine rhythm guitar supplied by co-producer Keb Mo’ (Montoya’s turn toward traditional soul coincidentally matches Mo’s recent solo work). The support from the rest of the players is also an integral part of the music, especially drummer Stephen Ferrone.

If you’re a fan of Montoya, this new path may take adjustment. But given a chance, it’s just as rewarding.