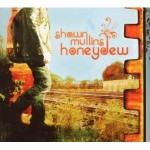 Shawn Mullins hit the big time in the ’90s with the sleepy folk tune “Lullaby.” Since then he has jumped around a bit and now finds himself recording for Vanguard, which has a long history in folk and blues. Mullins hasn’t changed up his recipe for songwriting to fit in, and the 12 cuts here are an eclectic mix of rock, folk, and R&B, with Mullins’ vocals sounding a bit like the late, great Steve Goodman.

While Mullins can definitely write a lyric, the band helps. Sheryl Crow band veteran Peter Stroud supplies most of the guitars with same tasteful support he gives to all of his other work. Whenever you hear a Stroud lick, it has a feel that blends perfectly while adding a distinct touch to a song. But Mullins is the star here, and his writing and singing dominate. “The Ballad of Kathryn Johnston” is a tale of a proud woman living where things have grown a bit rough. It’s wonderfully written with the minor-key feel and Stroud’s slide guitar lends a rowdy, menacing feel. Other tracks need only Mullins and his acoustic. “Home” works beautifully in that mode, “Homeless Joe” is an effective tale of an old blues man, “See That Train” is sung through a bullhorn and fits the lyric perfectly, as does a nasty slide guitar solo. On many of the vocals, Mullins voice takes on an earnestness much like Goodman’s. Many times we saw a wink behind Steve’s vocals, and we don’t always get that here. Mullins lyrics tend to stay a little more on the serious side of the street.

Mullins’ chart success probably surprised him as much as it did anybody. His intimate lyrics and folksinger attitude don’t mix well with Britney and company. But here he has found a niche that will serve him well.

This article originally appeared in VG’s Jun. ’08 issue.  All copyrights are by the author and Vintage Guitar. Unauthorized replication or use is strictly prohibited.