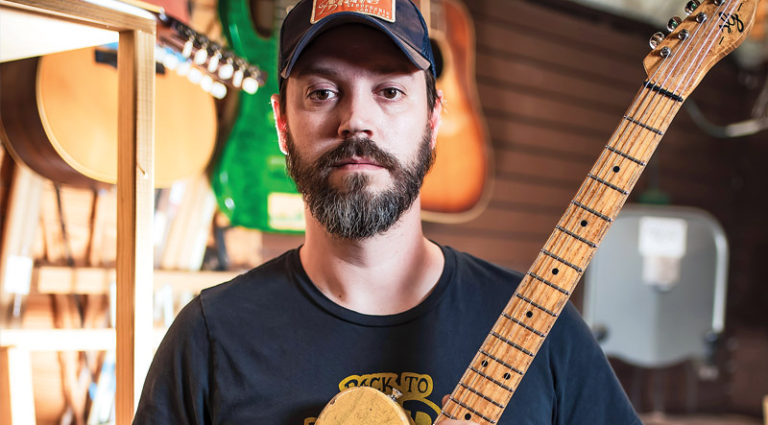 Thanks to giants like Derek Trucks, Warren Haynes, and Sonny Landreth, we’re living in a golden age of bottleneck guitar, with exceptional young sliders arriving regularly. Tulsa guitarist and builder Seth Lee Jones is among this rising group, offering Billy Gibbons-sized tones and wild pedal-steel tricks for bottleneck. On his new album, Flathead, Jones drops cool, funky licks all over the place. After a few spins, it was time to give Seth a call.

Flathead was cut live in the studio. How did it go during the sessions?
We tracked with all of us isolated as necessary for clean capture. The band has a residency at Tulsa’s The Colony club, which is a perfect proving ground for working out the details. I could think of no better way to get your arrangements together, and in this case we had to think on our feet for a live show. It definitely helped my end game to put a record together without fussing over edits and overdubs.

You developed an innovative way to create pedal-steel sounds, as we hear in “Tulsa Time.”
Developing the pedal-steel technique was actually a happy accident. I wanted to learn some Brad Paisley licks, and I’d built a Tele-style guitar with a Hipshot bender; I built the neck in Venice Beach, where I worked at the time, and assembled it in my home shop. The difference in humidity caused the neck to back-bow severely. Having been a lap-steel player, I realized the bender altered the I chord to a IV chord with both arms depressed, so I became infatuated with faking the pedal-steel sound. I still play that guitar and it now has levers on the fifth, third, and second strings. I’m using John Pearse Jazz nickel strings, the first two are .017s.

At 2:45 in “I Can’t Be Satisfied,” it sounds like two-handed tapping mixed with slide.
Absolutely correct; I’ve always been an Eddie Van Halen fan. I figured out that lick while trying to cop a Jimmy Markham harp lick and it’s since become a staple parlor trick for me.

Who are some of your other key guitar influences?
As for Tulsa cats, you can’t leave out Steve Pryor – he’s got to be mentioned. While living in L.A., I was exposed to all types of stellar players; Michael Landau really got to me. I saw him at the Baked Potato and wanted to burn my guitars when I got home. While studying at Musicians Institute, I did some open counsel with Carl Verheyen, and that changed my direction. Last but not least, Sonny Landreth. I wouldn’t have thought to try anything behind the slide bar if not for Grant Street. That album definitely changed my game.

Tell us about that last one.
The Revibe is a tube unit that looks like a head, but it’s a harmonic tremolo circuit that’s closer to a Univibe in tones, hand-built here in Oklahoma by Bob Peck. He’s a retired electrical-maintenance guy that makes a few great amps a year and does repair on the side. The reverb side is the classic Fender three-knob reverb unit. It produces no speaker power – just trem and reverb – and warms things up a bit. I don’t leave home without it.

Does “Moving Me” have baritone guitar?
Yes, I used a Mule Resophonic Mulecaster. Matt Eich is a good friend of mine and he’s making cool instruments in Saginaw, Michigan.

You build guitars, but also do repairs. How did you get into that line?
The repair side of my business is heavily influenced by my time working for Fren Asken (see our review of the Asken Intercooler in the May ’20 issue). The best lesson I got from Fren was observing his even temperament and the way he communicates with people. He’s one of the best restoration luthiers on the West Coast.

What’s the story behind your own guitars?
At this point I feel I can build anything I can imagine. My guitars are made in a small building behind my home; I make everything by hand, including the bodies, guards, truss rods, necks, and fretboards. I mainly do heavy restoration on vintage acoustics and electrics, but build 25 to 30 electrics and a few acoustics each year.

What is your approach to making guitars?
I use a combination of traditional and modern methods. The acoustics are based on the late Dixie Michell’s work; I was fortunate enough to meet her before her passing in 2015, and gleaned a great deal. I bought her old house and shop after she passed – guitars have been built in this very spot since 1981.