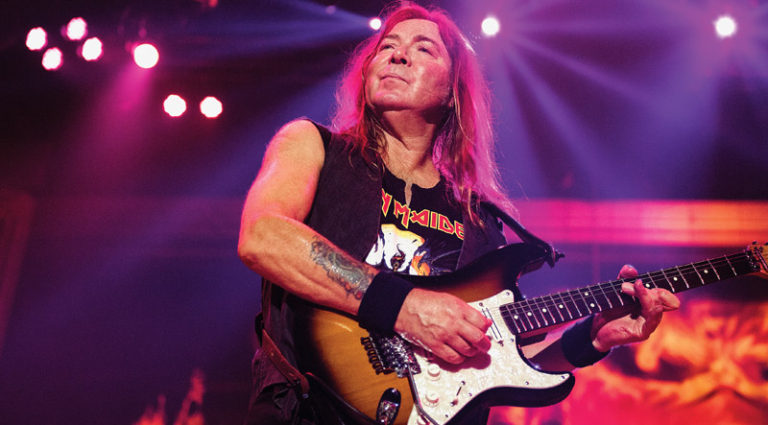 After 46 years, Iron Maiden is still reinforcing its stature as a legendary heavy metal band. Senjutsu, the British juggernaut’s 17th studio album, has earned critical praise. It’s also the band’s highest-charting album ever in the U.S., debuting at #3 on Billboard.

Clocking in at more than 80 minutes, Senjutsu is the follow-up to 2015’s The Book of Souls. Recorded in 2019, pandemic concerns delayed its release.

Co-founder Dave Murray doesn’t have a songwriting credit this time, but his musical ideas are there; he and fellow guitarists Adrian Smith (VG, March ’21) and Janick Gers all created distinct parts.

“On some tracks, there’ll be melodies, and the guitar solos are basically a free-fall,” said Murray. “You jump in and ad lib – be spontaneous. You’ll hear Adrian, Janick, and myself and our idiosyncrasies and changes. There are 10 tracks, and some are 10 or 12 minutes long.”

Iron Maiden excels at tight, explosive metal classics like “Run to the Hills” and “The Trooper,” but fans especially adore their progressive rock-influenced epic songs like “Rime of the Ancient Mariner.” Book of Souls featured the band’s longest-ever song, the 18-minute “Empire of the Clouds.” Senjutsu includes both shorter blasts like “Stratego” and dramatic marathons, notably “Death of the Celts” and “Hell on Earth.”

“Even from the very first album, ‘Phantom of the Opera’ was seven or eight minutes long,” Murray noted. “It stems from the start, really, and has continued through the band’s history. A lot of songs, like ‘Rime of the Ancient Mariner’ or ‘Hallowed Be Thy Name’ are supposed to be that way. They run off and it makes sense with the melodies,” Murray said. “You’re creating something that’s building. I think it’s just part of the identity of Iron Maiden; a lot of our albums start with a slow, moody part then jump into an upbeat section. It does vary. And it’s not verse/chorus/verse/chorus. Things go off then come back again! It’s the strength of the guys’ writing. It’s about the songs.”

Also, the grooves are notably darker on Senjutsu’s spacious arrangements.

“A lot of those moody, ominous melodies are like a soundtrack for a movie. That’s what I think of when I listen back to some of those slower passages,” said Murray. “I love all that stuff where it’s creeping along and there are these haunting melodies coming out. It adds to the mood of the song and gives it a lot of dynamics.”

Murray praises longtime co-producer Kevin Shirley for his work. He helmed along with bassist Steve Harris.

“Kevin’s a lovely guy and a great producer. He’s got a lot of really good energy, and brings it to the album. He’s always encouraging and bringing out the best in everybody. Everything was always on ‘Record,’ so all the magic moments were saved – as well as stuff that ended up on the cutting room floor (laughs)! Especially now with digital (recording). The good thing with Kevin is we get the analog sound using modern technology. He’s amazing.”

Murray stuck with a few classic guitars for Senjutsu.

“The main one was the California Series Strat I’ve been using for the last 15, 20 years. It has Seymour Duncan pickups and a tortoiseshell scratch plate. I also used a couple of Les Pauls – one that has a Floyd Rose on it, and a Standard.”

The past few tours, the band has alternated between “greatest hits” shows and sets focusing on a new album. The well-received Legacy of the Beast world tour focused on classics but also featured rarely-performed fan favorites like “Flight of Icarus” and “Where Eagles Dare.” Halted due to the pandemic, it resumes next summer. In the meantime, Murray tries to play every day, even during long breaks.

“It’s like anything. You want to keep your hand in,” he said. “If I’m watching a movie, I’ll mess around to keep my fingers in shape. I have a little studio with guitars so I can jot down ideas. I’ll jam with friends. I still play, but not with the intensity as with the band. I can keep myself busy (chuckles). I play because I love playing guitar. I love listening to music. It’s not, ‘This is work.’ It’s still something I enjoy as a hobby. It’s become a lifelong obsession.”