Home Music Robert Bradley – Out of the Wilderness 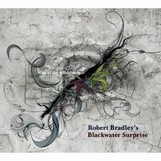 While Robert Bradley’s Blackwater Surprise deals in styles of music done by many bands – R&B, rock, soul, and jazz – it always brings an edge most bands don’t offer.

Out of the Wilderness, the band’s first studio record in five years, has that feel. The inherent soulfulness of Bradley’s vocals lets the band do things others cannot. For example, the title cut is a droning stomper where guitarists Matthew Ruffino and Zachary Throne weave around each other’s playing, while Bradley’s plaintive and soulful voice dips in and out, displaying one of the strengths that carry throughout this record – slide guitar and loud electric that mix nicely. Same goes for “Good Times In My Life,” a slice of soulful rock with guitars that lock like pieces of a puzzle. “Americaland” features funky wah chords and single notes that mix beautifully. The rock/soul mix of “Cryin’ My Eyes Out” features churning rhythm guitars, nice fills, and a solo that would make Carlos Santana proud. “Beautiful Girl” is an old-fashioned soul tune that lets one guitarist play lovely changes while the other pops in and out with single notes. The interplay and vocals are the key; everything is slightly off-kilter, but in the best way possible.