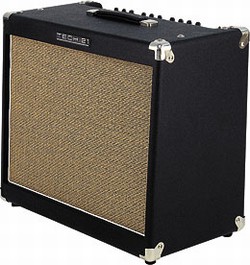 Tech 21 has long been the purveyor of cool solidstate gear that replicates the sound of tube amps, like the famed SansAmp pedals and their wide array of preamps and amplifiers. Here are two of their combo amps, one for electric players and the other for acoustic folks. Let’s fire ’em up.

Trademark 60
In a snapshot, the Trademark 60 is a 60-watt combo with two channels and one 12″ speaker. That may sound like the same features on a lot of other amps, but believe me, any similarities end right there.

For example, you’ll find a powerful active EQ with mid controls on each channel (in Channel 1 it’s called “Punch,” in Channel 2 it’s “Growl”). Channel 1 also has a Bite control for brightness, a gain knob and master volume. Channel 2’s control selection also has one called Weep, which adds a bit of that Class A singing tonality to your guitar.

The master section has another round of “Low” and “High” knobs to tweak the tone to fit whatever room you’re in, along with Reverb and Boost. In my opinion, Boost is one of the most practical amp features of all time – I mean, how many times have you wanted to have a crunchy rhythm tone, but then a real volume boost for solos? This circuit can add up to a 9dB boost for leads. When I was a kid, I spent years trying to figure out how to do that; on this amp, you just step on the footswitch and – voila – there it is! This Boost can also include reverb if you push the Link button. Then your volume increase can also be accompanied by a new reverb sound. Very cool.

Back-panel features include an effects loop and a SansAmp DI output for recording or playing through a PA without mics. A triple-function footswitch is included, so you can activate the effects loop, switch channels, or the Boost/Reveb functions.

As for tone, the Trademark incorporates the company’s SansAmp technology into its preamp to create that “tube-like” sound. Now, many companies – no, wait a minute – every company that makes solid-state gear claims that their products “sound just like tubes, man!” Actually, most of them don’t, but Tech 21 has long had a secret circuit to give their analog boards a pretty realistic tube sound. It’s hard to describe, but when you crank up the gain you get some tube-like compression and interesting low and mid frequencies which further give it a valve flavor.

There are great hard-rock tones to be found, but more impressively, the softly overdriven “Stevie Ray” tones are here in abundance. Pair this amp with a good Stratocaster (and I mean a good one) and you’ll find fabulous Texas blues tones in here. I feel confident that in a blindfold test, a number of players would swear this is a 100 percent tube amp. It certainly sounds better than many “hybrid” amps I’ve tested (i.e., those with a solidstate power amp and preamp featuring one or two 12AX7 tubes).

So go listen for yourself. The Trademark 60 is a very impressive little amp. It sounds great as it is and I’m sure it would be devastating if you added a 1×12″ extension cabinet. Nice job, Tech 21 (they also make a 2×12″ version as well as a smaller 1×10″ combo). 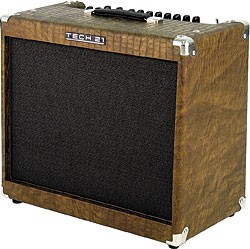 Bronzewood 60 Acoustic Combo
The Bronzewood is a compact, 60-watt combo for acoustic-electric players. Right off the bat, it has a few obvious things going for it, namely a separate microphone channel (for you coffeehouse performers who sing) and a guitar channel packed with performance-grade tools to optimize your tone.

As someone who’s tested most of the so-called “acoustic amps” on the market, I was impressed with the wide array of EQ controls on the Bronzewood. For acoustic-electric guitarists who use instruments fitted with piezo pickups, this is helpful, since piezos can sound either very good or very bad, depending on what kind of preamp they’re going through. Among the controls on the Guitar Channel are an active three-band EQ with semi-parametric, sweepable mids and a Sansamp tube/mic emulation circuit to help tame that nasty piezo quack. There’s even a Blend knob, so you can dial in just the right amount of SansAmp and direct guitar signal. There’s a Phase switch, too.

If this sounds like techo jargon to you, in simple terms, the Bronzewood gives you several knobs to tweak the tone of your guitar, so you can find the sound that suits you best. This definitely is not a one-tone amp – it has a Whitman’s Sampler of acoustic tones, which is a tremendous asset to the performing guitarist.

Okay, the Bronzewood has EQ controls up the wazoo. “But,” you ask, “What else you got?”

Well, it’s got two more essential tools for acoustic players, namely a built-in compressor and a footswitchable reverb. The adjustable compressor does a respectable job of taming the highs and lows of the acoustic signal (ranging from 1:1 to 5:1), while the reverb is a full-length, six-spring unit that sounds nice. And to round off the guitar channel, you have a notch filter to kick the crap out of any offending feedback squawks.

Over to the Mic channel, treats include an XLR mic input, another three-band active EQ and a Reverb Mix knob to control the balance of reverb between the guitar and vocals. For microphones, Tech 21 supplies a +24 volt phantom switch to fuel a powered microphone or an another phantom-powered device. Keep in mind that most powered mics are calibrated for +48 volts, so it’s possible that your specific mic won’t work with this amp. Solution? Bring your mic along when you test one. On the other hand, many dynamic vocal mics don’t require another power source, so perhaps it’s a moot issue.

Finally, on the back of the amp is an effects loop and a SansAmp Direct Out jack for recording or going direct into the PA. Its cabinet houses a single 12″ speaker and a special high-end horn.

How does it sound? Darn good. I spent quite a bit of time looking for the sweet spot, since I had so many tonal options to choose from. But when I found the magic tone, it was quite pleasing. Another acid test for acoustic amps is “headroom,” i.e., how loud you can crank it before the sound starts breaking up. I’m happy to report that the Bronzewood got pretty dang loud before I heard any clipping. Remember, an acoustic guitar amp is in some ways like a mini-PA system, so you want as much headroom as possible.

Any-hoo, I give the Bronzewood a big thumb’s up for functionality and tone. Plus it comes in a cool brown-alligator vinyl covering that adds to its allure.


This article originally appeared in VG‘s February 2005 issue. All copyrights are by the author and Vintage Guitar magazine. Unauthorized replication or use is strictly prohibited.