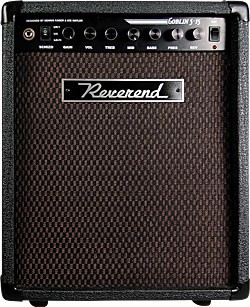 Reverend’s Goblin 5-15 is the brainchild of Reverend founder Joe Naylor and Dennis Kager, of Pignose and Ampeg fame. The Goblin was designed as a simple single-channel, all-tube amp with certain boutique features in small package.

At 163/4″ x 131/2″ x 91/2″ and 22 pounds, the Goblin certainly is transportable. Its lack of weight can mostly be attributed to the 10″ Jensen neodymium-magnet speaker, which weighs about half of what a standard speaker weighs, but delivers better low-end response and power-handling capability.

Like other Reverend amps, the Goblin employs an all-tube design and switchable power amp section with a matched pair of Electro-Harmonix 6V6 tubes, a preamp with hum-eliminating DC-filament 12AX7s, and a 12AX7 tube reverb circuit with an Accutronics tank. The all-plywood cabinet is covered in black tolex with hardware and spun-aluminum knobs in black, and a black faceplate with white silkscreen. The checkerboard grillecloth and retro-style Reverend logo add vintage flair.

Like a lot of other U.S. manufacturers, Reverend uses imported and American-made parts, then assembles and tests its amps in the U.S. All controls, switches, tube sockets, and jacks are mounted to the chassis, as are the PC boards.

Controls on the Goblin include Gain, Volume, Treble, Midrange, Bass, Presence, and Reverb, as well as Reverend’s trademark Schizo switch for punching up three voicings; the “US” setting has transparent mids, crisp highs, and beefy low-end for a Fender sound; “LO-FI” uses more mids and softer highs, for a warm vintage tone, and the “UK” has even more aggressive mids and crunchy highs for that British sound.

The back-panel layout includes a switch for setting output at either 5 watts or 15 watts. It also houses 1/4″ send/return jacks for the passive effects loop and three 1/4″ speaker output jacks – one each for 4-, 8-, and 16-ohm speakers. The “one jack for each impedance” setup is arguably better than the typical impedance switch (which is often forgotten when going between cabinets) or the confusing multi-impedance combination jacks.

With a Fender ’60 Relic Strat plugged in and the Schizo switch set to “US,” the amp delivered a remarkably big sound for a 15-watt 1×10″ combo – clean, crisp highs and big low-end you’d expect more from a 12″ combo. Dialing in some of the Goblin’s tube-driven reverb made the sound even bigger, with a lush ambience. Even with the bass and volume turned up, it stayed tight and responsive with all three pickups. Moving the Schizo switch into the “LO-FI” position fattened up the mids and smoothed out the highs, and added a bit of grit to the sound – all without losing its round, Fender-like tone.

With the Schizo in the “UK” setting and the gain control straight up, the amp started to break up nicely with that British bite in the upper midrange. One very notable absence was noise and microphonics from the preamp tube; it was nice to hear (or not hear) that quality tested tubes were used in the preamp section.

Next, we plugged in a Duncan humbucker-loaded Hamer Studio, and again the “US” and “LO-FI” settings produced a spacious clean sound that could be dirtied by just playing a little harder. The “UK” setting had more bark with the humbuckers than with the single-coils, though it got a bit mushy if we pushed the gain too far. The preamp stayed together better with the lower-gain single-coils in the Strat.

We checked the Goblin’s performance running straight into a Celestion-loaded Randall 4×12″ with the Hamer. We were pleasantly surprised as it delivered a loud, crunchy British-flavored overdrive that wasn’t mushy or harsh. Note separation was good and, with the Schizo in the “UK” setting, the amp offered a fair amount of gain. The 5-/15-watt power feature definitely made the amp “apartment friendly,” allowing it to be used more as a practice amp – without sucking the life out of the tone. In 15-watt mode, the amp is plenty loud, both clean and overdriven, for rehearsals, studio work, or even some small gigs. And it’s a breeze to tote.