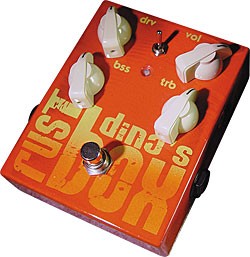 Italians have historically been known for great craftsmanship and detail. Names like Lamborghini and Maserati conjure the image of the exotic and the high-end detail required by people with discerning taste. That same passion for detail and craftsmanship led guitar buddies Alessio Casati and Andrea Bagnasco to form Dino’s Guitars in Savona, Italy, in 1995. The two started by building custom guitars and speaker cabinets, which eventually led to manufacturing hand-wired effects pedals.

The Bagnasco’s Rust Box is not your typical distortion unit. Housed in lightweight aluminum and assembled using a mix of PCB and point-to-point construction, there’s an impressive attention to detail in its construction. Plus, its potentiometers are sturdy and smooth, and the true-bypass footswitch is top-quality and extremely quiet in operation.

Plugged in between a mid-’70s Fender Telecaster and a US Masters TVA30 combo, the pedal’s transparency is immediately evident. When disengaged, it adds no coloration of tone – and stepping on the switch quickly yields the realization that this is not your daddy’s distortion pedal!

The Rust Box is very diverse thanks mostly to its Voice switch, a toggle that allows it to act as three pedals in one by changing the gain and compression structure to allow everything from SRV drive to Halen-esque “brown sound” as well as a great-sounding clean boost. Further, the switch helps tailor the Rust Box to work with different instrument types, so whether you stay with your solidbody, grab a semi-hollow, or use a full hollowbody, the Rust Box works very well with the characteristics of each instrument. And it’s easy to dial in just a bit of breakup in the unit for everything from a nice, warm jazz tone to searing distortion for even the heaviest grooves through multiple amps.

The Rust Box’s real secret lies in its Bass and Treble controls, which allow for dialing in just the right tone with each instrument. This also means it works great with bass, yielding a nice Geddy-like growl out of an early-’70s Fender Jazz, and sheer overdriven thunder from of a ’73 Hagstrom Swede. 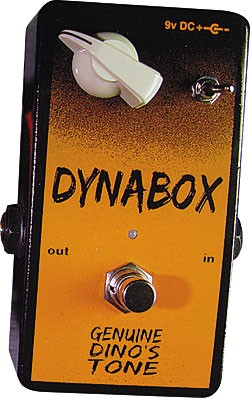 The Dino’s crew’s dedication to quality also carries over to its Dynabox, a hybrid booster designed to enhance the tonal palette and dynamic capabilities of any rig.

Plugging it in between the Tele and the TVA30, the Dynabox creates no issues in terms of added noise – a claim that can be made by precious few boost pedals. And when engaged, the unit makes it immediately apparent that you will have a lot of headroom. That means that for simple lead boost scenarios, most players will not need to deviate much from the standard settings.

Through numerous tests, the Dynabox worked well to reduce volume differences between humbucking pickups, single-coil pickups, and instruments with active electronics. The unit’s two-position mini-toggle doesn’t have a label, but changes the pedal’s sonic spectrum. The switch acts something like a compressor. Its cleaner setting works great for standard clean boost with just a hint of compression, creating a nice warming effect, especially with a hollowbody, where it yields a very pleasant jazz/mellow-blues tone. It even adds nice spank and growl to an electric upright bass, in case you play one at a big-band gig!

The switch’s other position adds a more compressed, crunchier sound, reacting much differently to various instruments. In some instances, the result is not as versatile as the unit in the first position. The added crunch is sometimes a bit too much with humbuckers. This is not an overdrive – it generates too much grind to represent an amp breaking up, so a Gibson Les Paul sounds slightly muddy and undefined. Pushed by a Telecaster, however, the unit is more in its element.

From fine wines and great pasta to exotic sports cars and Sophia Loren, the luxuries of the boot-shaped country live on in Dino’s Guitars’ Rust Box and Dynabox – two stompboxes for those with discriminating tastes looking for an added treat.