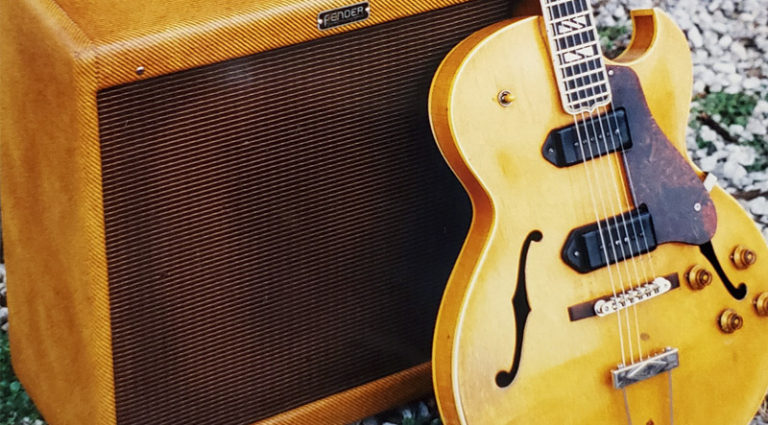 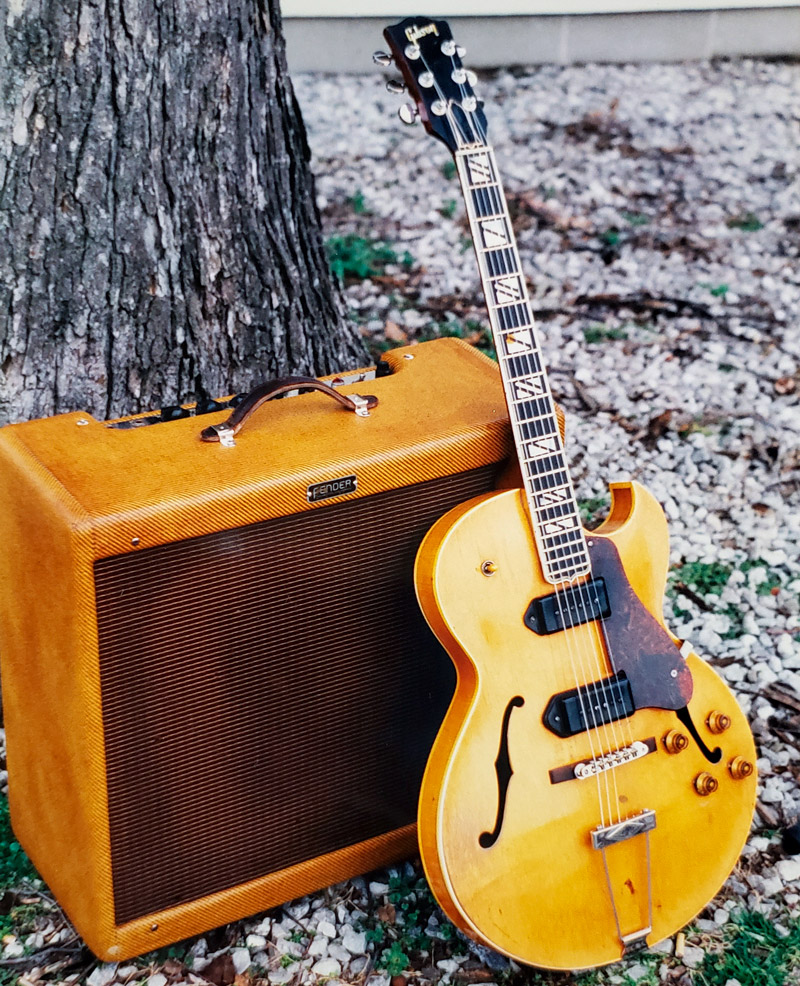 Kevin Ludwig first became aware of Fenton Robinson in 1975, when he heard Boz Scaggs’ version of “Somebody Loan Me a Dime,” which spurred him to buy Robinson’s 1974 Alligator Records debut album. A few years later, he and a friend traveled from Indianapolis to check out some of Chicago’s blues clubs…

“Being young and adventurous, we had no plan, and we ended up on Rush Street, then eventually at Wise Fools Pub, where Fenton’s name was on the sign out front.” Ludwig said. “We popped in to watch, and the first thing I noticed was the beautiful ES-225 he was playing.”

A knowledgable player himself, Ludwig was struck by certain details of the guitar, especially the replaced fretboard and a burn mark near the tailpiece.

Twenty years later, a bandmate showed Ludwig a photo of a guitar being sold by local luthier Tom Everett.

“I took one look and said, ‘I know that guitar!’

“I’d just got a tax refund for about that much, but to make sure, I ordered a Fenton CD that showed the guitar. The burn mark sealed it – Tom had Fenton’s guitar!”

Though he worried it might be stolen property, Ludwig also didn’t want to let it get away. Researching such things was a challenge in the days before the internet.

“I began by calling Alligator and told the operator I had Fenton’s guitar. I asked for his contact information and to speak with Bruce Iglauer (see page 60) to which, the person replied, ‘Mr. Iglauer is busy. If you have Fenton Robinson’s guitar, you must know how to get in touch with him.’ Click.”

A bit peeved but undiscouraged, Ludwig then grabbed a copy of Living Blues magazine. Editor Jim O’Neal took his call.

“He gave me the name and number of a promoter who booked Fenton, who in turn gave me Fenton’s address and explained that Fenton’s health was not good. He also warned me that Fenton was suspicious of people because he had been ripped off so many times.

“Along with photos of the guitar, I sent a letter to Fenton asking whether it had been stolen. In short order, I got a reply saying it had indeed been stolen and he’d like to have it back. He included his phone number.

“I called, and Fenton was polite, but guarded. When I told him I’d paid $1,200 for the guitar, he got upset and said I was crazy… the conversation just didn’t go well.”

While no less resolute about getting the guitar back to its rightful owner, Ludwig also couldn’t afford to simply give it away. He called O’Neal again, recalling the unproductive conversation with Robinson. O’Neal suggested he reach out to Dick Shurman, who produced Robinson’s Nightflight album.

“When I called Dick to explain the story along with my frustrations, he immediately offered to help. A few days later, he called to say he’d talked to Bruce Iglauer, who wanted to talk to me. So I finally had a conversation with Bruce, who said Alligator would reimburse me for the guitar.”

With Robinson’s blessing, Alligator bought the 225 on his behalf, and the $1,200 became an advance on his royalties.

“Bruce asked me to ship it to Fenton, but after all this I was not going to risk having it damaged or lost in shipment. Plus, I wanted to personally hand it to him.”

Ludwig was soon on the road to Rockford, Illinois.

“I was nervous as I rang the bell,” Ludwig said. “When Fenton answered, I was a bit shocked – his head was shaved and he had a long scar after surgery for brain cancer.”

Robinson offered Ludwig a seat in his small, tidy apartment. When he handed over the guitar, Robinson sat it on a cabinet.

“I was a bit surprised he didn’t open the case right away, but he was simply being polite. We made small talk, and I commented on a beautiful Gibson L-5 sitting in a corner. Fenton asked if I’d like to play it. ‘Of course!’ I told him.

“While I played, Fenton stood up and, with his back to me, opened the 225 case. His voice full of emotion, he said, ‘The old warhorse.’ He turned with a smile and said, ‘Thank you for thinking of me this way.’

“That instantly made it worth every moment I’d put into returning the guitar. Fenton sat next to me – I was playing the L-5, he the 225; he talked about how he’d bought it in the ’50s and played it with Ike Turner.”

Guitar delivered, Ludwig eventually started for the door. Robinson walked him to the car as they exchanged good-byes.

“All the way home, I was stunned by what had just happened,” Ludwig said.

Robinson passed away a few months later, in November of 1997. On a subsequent trip to Everett’s shop, Ludwig and the luthier chatted while blues played quietly on the shop radio. One of Robinson’s songs came on.

“I said ‘Hey, that’s Fenton!’ Tom said, ‘Yeah, that’s the guitar – I recognize the tone.’ We listened in silence, smiling as its master made it sing.”