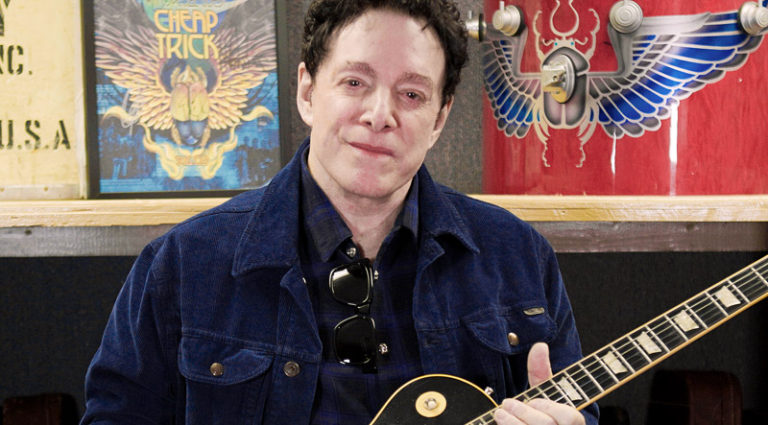 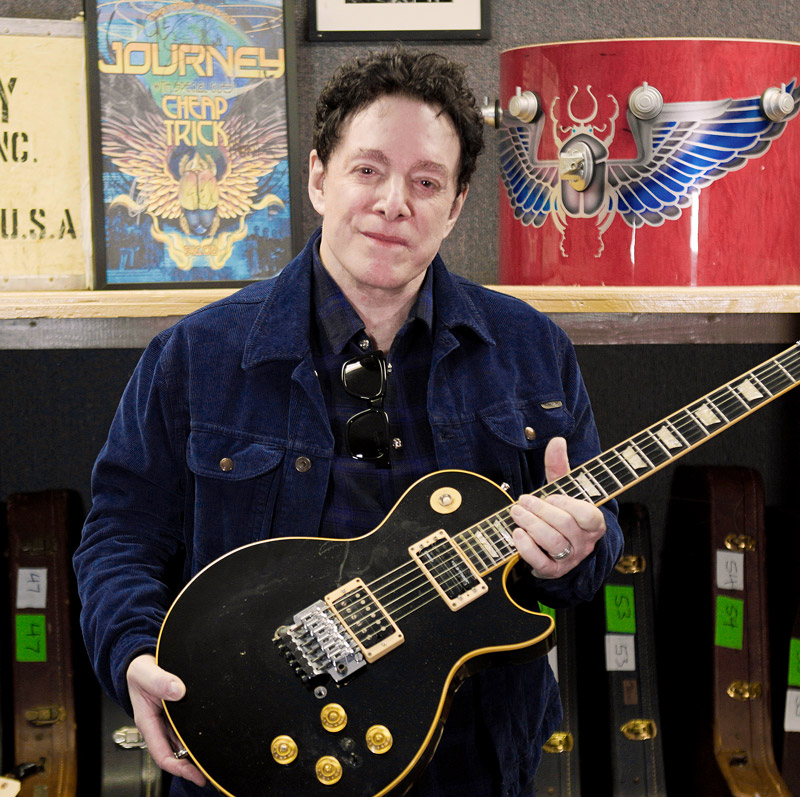 Eyebrows raise with news that a superstar guitar collector is preparing to sell iconic instruments. Alarms might trigger, even. But don’t dial 9-1-1 for Neal Schon.

Holder of 800 instruments “…and counting,” Schon, co-founder of one of rock’s all-time biggest acts, recently discovered that his 15,000-square-foot storage facility was bursting at the seams. But his motivations for selling 112 guitars via Heritage Auctions on July 31 go beyond simply having “too much.”

Son of a jazz musician and big-band arranger, Schon was given a Stella at age 10 and immediately took to it; within a few months he was proficient enough to earn a big step up…

How did you become enamored with great old guitars?
The first “vintage” guitar I owned was a beautiful ’63 ES-335 my father bought for me when he knew I was serious about playing. I was heartbroken when it was stolen from our apartment in San Mateo – it was a really nice one, man. We bought it used, but it was so clean and had a beautiful neck – very, very comfortable. And it sounded amazing; it’s one of the reasons I still love 335s and 355s.

I’ve listened to and learned from so many amazing guitarists, and the more I learned about different tones and textures, the more I wanted to experience them all, from big jazz boxes to Les Pauls to Teles and Strats. Then, working with Paul Reed Smith, I discovered many things about chambering and semi-hollow bodies; I wanted something that suited what I was looking for.

How did you manage to gather 800 guitars?
“Man, I’m a guitar fanatic – as bad or worse than Joe Bonamassa (laughs). For many years, I’ve invested in the finest I could find – those I admired and wanted play. But until Covid, I was always working, so I didn’t have time to go through and really experience them. Once I finally had time on my hands and got to set them up and actually play them, I was astounded by the pieces I’d found all over the world, going back to my beginnings in 1971 with Santana.

When and why did you decide to sell some?
I’ve been thinking about it for quite some time, but for years we’ve been touring for six or seven months out of the year, or we’re recording, so I never got around to sorting through things. Finally, when we had all this time off I managed to get to our warehouse with my guitar tech, Adam Day, who organized everything and filed it all, took pictures – the whole thing. I finally knew where everything was, so I could find it without going through 800 cases. It was quite a task.

At the time, I was working on another solo project with Narada Michael Walden, called Universe, where used a custom 24 NS-14 and a couple of custom Strats. I’m all about moving forward with different designs tailored to my needs.

As you were choosing pieces for the sale, how did you filter?
Well, they’re all amazing instruments, and I’ve had a lot of fun with them. I tried to round out what to sell, and really, I gave Heritage some of my finest pieces – stuff I would stick in a museum if I had time to run one. Some of it is so clean I won’t play them or mess with them, as I like to changing pickups, rewiring, and reworking things until I get what I want out of them so. For example, there’s an absolutely perfect Les Paul Standard and a perfect blackguard Tele.

Do you feel it’s just time for them to move on to their next “life”?
I’d just like somebody to experience them. The ’59 Les Paul Standards we’re selling are two of the cleanest I’ve ever seen. The Strats are off the hook. The blackguard Teles are off the hook. There are Broadcasters, a couple Teles, and two “nocasters.” I love them all, but I have a few Custom Shop ’63 Teles that I just love and do everything I want them to do.

I’ve been fortunate enough to make a really great living and to buy the guitars I’ve always wanted. I’ve experienced most everything I want to try, so now I want to hone my collection down to my top 15 or 20, where I know exactly what the guitars are going to do every time I pick them up. There a few I always bring to the studio because I know exactly what they’re about – they do what I want and sound the way I want them to sound. The necks are worn to my hand and their frets are the way I like them.

You’re selling a few keystone guitars from Journey’s heyday, including the black Les Paul Pro with the Floyd Rose you used on Escape and the legendary single “Don’t Stop Believin.’”
Yeah, that guitar has been on many, many famous records, songs, and tours – “Stone in Love,” “Who’s Crying Now,” and the Escape tour that was shown on MTV back then. The DVD of that concert was released in 2005 and the clip of “Don’t Stop Believin’” has 122 million views on Youtube.

What’s interesting about that guitar is the fretboard is ebony and the neck is maple, so it’s got some snap with the mahogany body – it speaks really well.

There’s also the late-’60s Les Paul goldtop you played in Santana.
I ended up experimenting with that one on later Journey albums and tours; I put humbuckers in it. Back then, I used it on Santana III, including “Everybody’s Everything,” and also on Caravanserai.

I got that guitar by trading a Gibson Barney Kessel. After the 335 was stolen, we used the insurance money to buy the Kessel because I thought I wanted to play a jazz box. But it was just too big for me, so I traded it in for the goldtop, which became my main axe for the longest time – I played it in every club up and down Broadway in San Francisco, jammed with Elvin Bishop a lot, and with B.B. King at the Fillmore. I loved that guitar and its amazing neck and sound.

Another is your Guild F-50R, which offers a truly unique chance to own the guitar used to write and record “Wheel In the Sky”…
“Wheel In the Sky” and “Patiently,” which was the first song I ever wrote with Steve Perry. It’s basically on all the records I did when Steve first came to the band – Infinity, Evolution, Departure. All of the songs with acoustic guitars are that one and the Guild 12-string. I had an endorsement with Guild at the time, and that was my pre-show warm-up guitar for years before Steve came into the band.

What spurred your interest in playing acoustic?
I was a fan of Peter Townshend and the early Who; I learned a lot by listening to them. There was always really strong acoustic mixed with the electric, so we started doing that in Journey with producer Roy Thomas Baker.

Why not put it in a display case?
Well, I’ve moved on, you know? We’re in different places. It just sits, so I think somebody should enjoy it. And really, the songs are what have sentimental value to me; I don’t feel it’s the instrument that’s magical. The magic comes from within yourself and the people in the room. It doesn’t matter which guitar I used; the Guild just happens to be the one I used on the road for all those tours. It’s a great guitar, but it had its day with me. Somebody’s going to love it. I have so many great acoustics now. I’m evolving every day and I get inspired by new guitars.

You’re selling some very clean vintage ES-335s.
They’re some of the cleanest I’ve ever owned – there are three blonds – ’58, ’59, and ’60. There’s also a 355 in mint condition. Now, I use a beat up Custom Shop one made years back that I really like. So, someone can scoop up these gorgeous old ones.

Are you still buying/adding to the collection?
Yes, I’ll always be buying when something catches my eye. I’ll get it and see where it takes me.

Which guitars are you using most these days?
I have several go-tos for recording. Right now I’m working on a new Journey record with Narada Michael Walden on drums and Randy Jackson on bass. I brought 20 of my favorites into the studio – some are Fenders from the Custom Shop, then there’s an old NS Les Paul signature that Les loved when he saw it – we were friends and I got to play with him quite a few times. That guitar was the first to have my Axcess neck and does a certain thing I’m looking for on certain songs.

I also used a ’63 Tele. I’d never played many Teles on a record, but I got really into them some time ago. I had to mess around with them, and when I found the right Fuzzface in front of a Tele, I was like, “Wow, that’s something else!” It just jumps, and you can get all the tones out of the bridge pickup. Just bring the Volume up and set the amp right and you get nice Strat fatness, but it’s really detailed and you hear every note. Pull it down and roll off a little bit of the Tone so it isn’t so bright. I’ve really gotten into working the Volume and the Tone on a nuts-and-bolts guitar.

There may not be a modern comparison to how big Journey was with Escape.
You’re saying “was,” but it’s not over, man (laughs)! We’ve been so fortunate, and we’re going back into stadiums now, selling out arenas. It goes to show that, more than any individual, the band has been about the songs we crafted. They’ve stood the test of time and they’re classics. We’ve been through a lot of changes, but we’re blessed to have so much great fan support. They’re one of the reasons I got on Instagram and Twitter and Facebook during the pandemic; I wanted to take people’s minds away from the hard times and create music on the spot, which everyone really seemed to enjoy and helped ease the downtime. I love my fans and like to stay in touch with them.