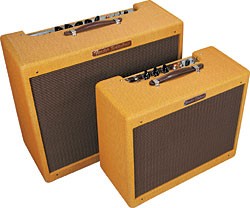 Fender “tweed” guitar amplifiers – the Twin, Deluxe, Bassman, Champ, etc., from the 1950s – are the most sought after amps in the annals of guitardom.

Whether it is Leo’s legendary circuit design, their tweed covering, top-mounted controls, or just killer tone, the “tweed” amp is a true industry standard that has been copied, reissued, and modified by major manufactures (i.e. Fender, Peavey, Carvin.) and boutique builders alike. And today, the values of vintage Fender tweed amps simply put them out of the reach of many players. 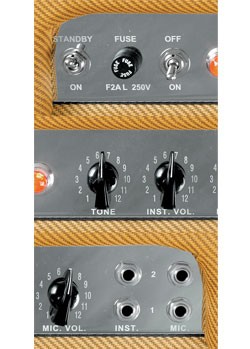 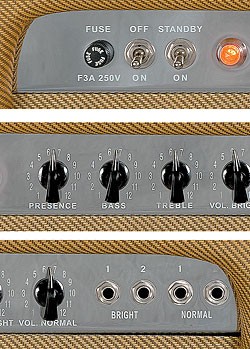 With a Fender Custom Shop Robert Cray Stratocaster and a humbucker-loaded Guild Bluesbird, the ’57 Deluxe offers up a bright, full tone with a very generous serving of musical overtones. The simple, straightforward single Volume and Tone layout allow both guitars’ personalities to shine, with chiming bell tone from the Strat and a lush, fat, articulate humbucker sound from the Bluesbird. This is one of those amps where a reverb circuit isn’t really missed; the thick, saturated sound of the amp needs no help, as its lively, midrange response and clear top-end are very well-balanced. The amp started to break up nicely about halfway on the Volume control, and rolled into a smooth, crunchy overdrive as it heads to full volume. The amp responds well to pick attack and changes in the guitar’s volume controls, making it easy to clean up the sound right at the guitar.

The Deluxe’s combination of light weight (it goes about 25 pounds) and big sound make it an ideal choice for studio work or small-to-medium gigs.

Plugged into the Bright channel of the Twin, the Cray produced a shimmering classic Fender-6L6 clean tone with thick, round bottom and crisp highs. It took very little tweaking to find the sweet spots using the amp’s Bass, Treble and Presence knobs. The well-voiced passive tone controls, along with Presence and the Normal/Bright inputs, make it easy to dial in great, natural sounds, whether you play single-coils or humbuckers.

The ’57 Twin is a real powerhouse, with a loud, full clean sound and a thick, harmonically rich overdrive sound, especially with a high-quality overdrive pedal in front of it.