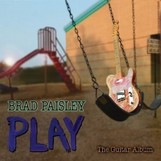 Brad Paisley’s albums have been admirably consistent, emphasizing vocals, of course, but usually spiced by a couple great Telecaster workouts. In the case of Play, five of the 16 tracks are vocals, the remainder instrumental. Such albums aren’t easy to get past most Music Row producers, who favor radio airplay over quality, unless a major-label act has attained the highest level of success. Not a problem for Paisley, who along with friend and producer Frank Rogers is at the point where he can call his own shots.

The five vocal duets are effective enough, though “Let The Good Times Roll” with B.B. King is clearly an excuse for swapping licks. “Come on In” celebrates Paisley’s friendship with fellow Tele-twanger Buck Owens. He and Rogers reworked a solo demo Buck recorded in his Bakersfield office into a duet that evokes Buck’s trademark “freight train” sound. Keith Urban joins Paisley for “Start A Band,” the album’s first single and, not surprisingly, most lightweight, radio friendly moment. The most moving duet, however, is the guitar-centric “More Than Just This Song,” with Steve Wariner, who wrote it as a requiem for his friend and former boss Chet Atkins. For Paisley, it honors his late guitar mentor Hank Goddard. Each plays an instrument owned by their respective hero.

Paisley typically closes his albums with a hymn. This time, his eloquent acoustic instrumental “What A Friend We Have In Jesus,” is next to last, since Arista added one more vocal, “Waitin’ On A Woman” with cameo by Andy Griffith. While it’s guitar-light the song’s sentimental message is pure, timeless country, enhanced by Griffith’s presence. The days when major labels routinely release country guitar instrumental albums of any sort are long gone.

Given that, it’s a tribute to Paisley’s integrity that he’s willing to take such a gamble, but absolutely no surprise he pulls it off so masterfully.