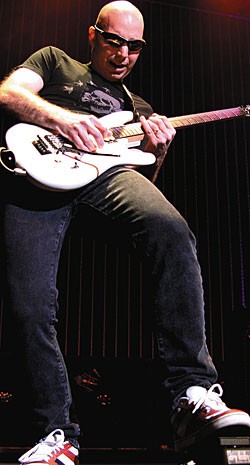 It’s been 20 years since the release of Joe Satriani’s landmark album, Surfin’ with the Alien , the instrumental platter that put “shred guitar” on the map and launched a school of heavy guitar gods (and just reissued on Sony Legacy as a deluxe CD/concert DVD). Today, Satriani is an established recording artist and focal point of his G3 tours. But in 1987, he was just another greasy guitarslinger looking for a break.

When did you realize that Surfin’ was a hit?
It wasn’t until a few months after its release. By February of ’88 I was playing guitar on Mick Jagger’s solo tour, had a full-page story in Rolling Stone , and in a few guitar magazines. So things were looking good. My band was touring like mad, and I even got on MTV! But it was rock radio that really broke the record and, that took time back in those days. Fortunately, DJs seemed to embrace the record.

Do you think the music world was simply ready for an instrumental guitar album?
In short, it was a great-sounding recording of upbeat songs. It also had unexpected juxtapositions of musical composition and production styles.

One thing that set you off from other players back then was your melodic nature. Where did that come from?
I grew up listening to every kind of music – classical, jazz, Motown, rock and roll, funk, blues, rock, and heavy metal. I absorbed it all, and tried to remember the good bits! I like a strong melody, interesting chords, and a good groove.
What kind of guitars did you use on Surfin’ ?
I used a Kramer Pacer made from spare parts, and two guitars I assembled from Boogie bodies and ESP parts.

The tone on the title track is so big, throaty, and dry.
It was the Kramer into a Vox wah and a Chandler Tube Driver into a Marshall half-stack. We used an Eventide 949 Harmonizer for the pitch-shift effect. 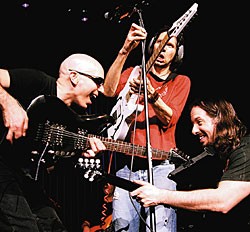 What modern bands or guitarists do you listen to?
Deftones, the Killers, Jack White, Ned Evett, Wolfmother, and Beck. But having said that, I just found a great collection of the Carter Family on iTunes that I’ve been listening to quite a bit. I still listen to Clapton and Hendrix a lot, too. Billy Gibbons is a big influence on me and his writing with ZZ Top is so revolutionary. Nobody writes contemporary blues like Billy.

Who are some of your other guitar influences?
I always thought I was part Chuck Berry, Jimi Hendrix, Jimmy Page, Jeff Beck, and Allan Holdsworth… the list is long! But I wear my influences on my sleeve – it’s my way of telling the truth, musically, and also saying “Thank you” to those who blazed the trail.

You’ve been playing instrumental rock for more than 20 years. Do you ever think, “Man, I want to get a singer and form a band!”
Well, there never seems to be enough time to do all the things I wish I could do, musically. But I play on other projects; I [recently jammed] with Booker T. Jones and Steve Miller. We played blues late into the night on vintage gear. It was an amazing experience.


This article originally appeared in VG‘s September 2007 issue. All copyrights are by the author and Vintage Guitar magazine. Unauthorized replication or use is strictly prohibited.
joe satriani – surfing with the alien(live in san francisco)