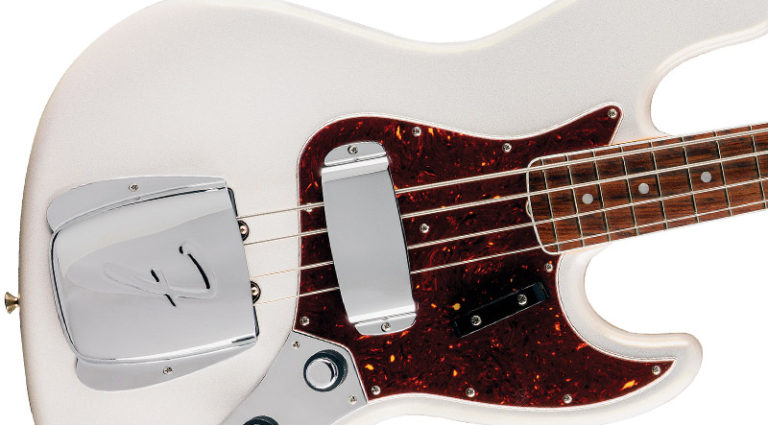 Though it looks to be straight from a ’60s catalog, Fender’s 60th Anniversary Jazz Bass isn’t a true reissue. Rather, it’s a “celebration” of the innovation, style, and vibe appreciated by anyone lucky enough to have ever played an original “stack knob” Jazz.

At 9 pounds, 4 ounces, the 60th Anniversary’s alder body is neither featherweight nor bruiser. Dressed in a shimmering nitrocellulose-lacquer finish Fender calls Arctic Pearl, its matching headstock and bound neck are touches that rightfully represent a top-end example. The concentric potentiometers are topped by the requisite stacked Volume and Tone knobs, while reverse-gear tuners, threaded steel saddles, waterslide decal, tortoiseshell pickguard, tall frets, 7.25″ fretboard radius, and ’60s U-profile neck re-create the look and feel of the original made from 1960 to ’62.

Nicely merged with those elements are the model-specific Pure Vintage ’62 Single-Coil pickups, which are reproductions with cloth-wrapped output wire, fiber bobbins, flush-mount pole pieces, and Alnico II magnets. Output measures approximately 7k ohms at the bridge and 6.5k at the neck.

Fit and finish are immaculate, with a well-groomed bone nut, tight neck pocket, and carefully manicured frets. Out of the box, our tester played fast and mean; the stack-knob configuration offers independent/11-position tone control for each pickup, both of which deliver the distinctive punch of their modern counterparts and remain pleasantly quiet for single-coils. The neck is slightly thicker than a modern Jazz, but feels familiar from the narrow 1.5″ nut all the way up the rosewood fretboard.

Fender’s vintage-style hard case is also a home run, with its brown-Tolex covering and famous orange semi-plush interior. For fans of the utilitarian aesthetic, there’s a Roadworn version of the bass with a mid-’60s/C-shaped neck, pau ferro fretboard, no tug bar or chrome covers, and three aged-finish options.

To those who’ve never basked in the glory of playing a “stack-knob,” the 60th Anniversary Jazz Bass hints at what made the “golden era.”