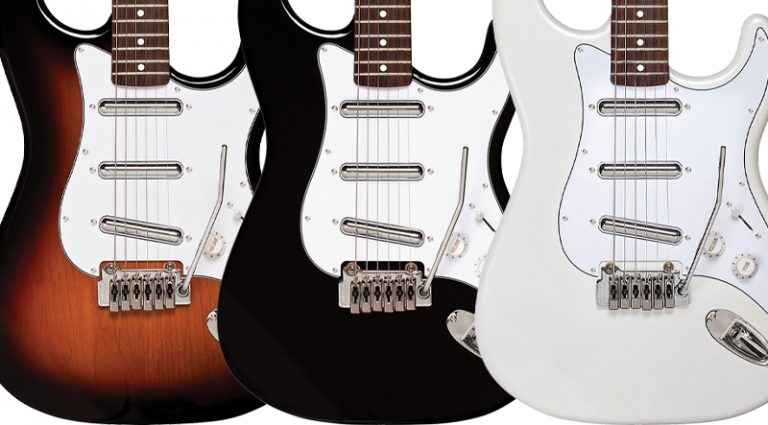 The Danelectro name first surfaced on amplifiers in the late 1940s, then later on guitars made with Masonite bodies and lipstick-tube pickups, along with electric sitars, baritone guitars, and “Longhorn” basses.

In 2006, the Evets Corporation bought the name and began to offer a fetching line of retro-styled guitars and basses. Its most-recent, the Danelectro ’84, alludes to the year when Stevie Ray Vaughan was ubiquitous on stages around the world and on MTV, his Southwestern grit, soul, and attitude sometimes relayed via guitars with lipstick-tube pickups.

The ’84 has a contoured 22-fret neck, graphite nut, three lipstick-tube pickups manipulated by a five-way selector, and a floating Wilkinson vibrato bridge. It’s offered in three-tone sunburst, black, and white on an alder body with asymmetrical double cutaway, and employs a 25.5″ scale with a rosewood fretboard.

The ’84’s girthy C-shaped neck and flat 12″ fretboard radius address the concerns of modern guitarists who employ diverse playing techniques, and its Volume and Tone controls bypass electronic fuss. Frets have a clean finish, and while the Kluson-style tuners and selector switch aren’t high-end, they get the job done. The Wilkinson vibrato allows the player

to fine-tune string height, and its bar pushes into the unit, allowing for tightening the bar with only a few turns.

But it’s the pickups that have brought us to this party, and they do not disappoint. Played through a bevy of blackface-style combos and a high-gain head, it sounded sweeter than a glass of Texas iced tea, pickups yielding that classic nasal quality with smooth, curvy bottom. The neck pickup leans toward the upper end of the EQ spectrum, doling out resonant chime, spank, and cluck while retaining plenty of warmth but still cutting through a mix. It’s the type of plucky ’tude usually found with instruments at twice the price. The two and four positions of the selector are spot-on, ushering all manner of chunky goodness, but the guitar also shines on Rickenbacker-style arpeggiated jangle. The bridge position is brighter and tougher, yet yearns for a Tube Screamer to fulfill its life’s work. The middle pickup has a subtle honk that seasons the other when positions two and four are engaged.

Player-friendly, comfortable, and offering a bevy of usable tones, you’d be hard-pressed to find a tastier guitar for the price.