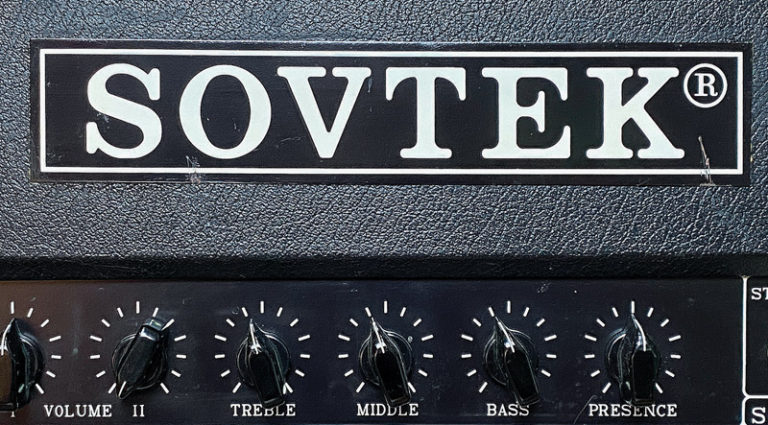 Given their development in the twilight years of the U.S.S.R. and arrival at the fall of the Iron Curtain, it was a gutsy move to name an amp after a notorious Soviet fighter jet. Then again, Mike Matthews has always been a gutsy guy, and if his no-nonsense Sovtek tube heads evoked a certain Red Army ethos, so much the better.

It’s still difficult to believe that a combination of labor-organization efforts and shortages of IC chips could drive America’s biggest effects manufacturer out of business, but in 1984 that’s exactly what happened to Electro-Harmonix.

Matthews, who founded E-H in 1968, barely took time to lick his wounds before seeking new opportunities behind the iron curtain, of all places, establishing an ambitiously mixed bag of ventures in the Soviet Union.

“I was the first American allowed to visit some Russian all-military cities, and the first foreigner to sign direct contracts with Russian tube factories,” Matthews said in a 2004 interview for Guitar Effects Pedals: The Practical Handbook. “All of this used to be only through the electronics ministry in the central government. So I started getting tubes from Russia, and my new girlfriend, Irusha, who was Russian and lived in St. Petersburg, ran my Russian business.”

Matthews established the aptly-named Sovtek brand in 1988, and his ever-deepening connections in the world of “Soviet” electronics production would eventually help revive the Electro-Harmonix effects line. But because he got his feet on the ground via the country’s thriving vacuum-tube industry, a tube amp was a natural – and the resultant creation was a doozy.

The Soviet Union was officially dissolved in late December of ’91, and by December 26, Matthews was dealing with a country that was again called Russia. Released in 1991, Sovtek’s MIG-50 was the company’s first offering. Designed by New York ampmeister Tony Bruno and manufactured in Russian military factories, it used an abundance of military-grade components. Intended as a 50-watter using a pair of 5881 output tubes (similar to the 6L6GC), Matthews said the first run of MIG-50s was given an under-spec’d 30-watt output transformer that reduced overall power. The results were surprisingly toneful, however, inducing easier compression and earlier distortion, so early exports were re-branded MIG-30 and sent onward to Western markets.

By ’93, the factory was installing proper 50-watt OTs, so the specs had settled into place by the time our featured amp was manufactured in late ’93/early ’94. Otherwise, the design is very much akin to the ubiquitous Fender 5F6A tweed Bassman circuit, which became the Marshall JTM45 circuit, then evolved (with a few changes) into the “plexi” circuit, then… ended up in a disproportionately large number of all guitar amps ever manufactured.

For years the cornerstone of Sovtek’s lineup, the MIG-50 was taken further from the tweed Bassman with solid-state rectification in place of a tube, and three 12AX7s in the preamp and phase inverter positions – all original-issue Sovtek tubes, naturally. True to the Bassman/JTM45/plexi designs, however, is the lack of a Master Volume control, with just a single main Volume knob for each of its two channels, shared Treble, Middle, and Bass controls, and Presence.

With all of the above in mind, to say that anyone “designed” the amp – Tony Bruno or otherwise – is a stretch, given the circuit’s ubiquity. But there’s always some configuring and tweaking of layout to be done, so we won’t suggest no credit is due. Even so, given the Soviet-era military components and other quirks and variables, fans of the MIG-50 feel it has a sound all its own. “A cross between Bassman and plexi” might be the easy description, but aficionados know even that doesn’t fully capture it.

“MIG-50s tend to have a big Bassman sound, but with a bit more harmonic low-end,” he said. “It’s an interesting take on a legendary circuit, and it sounds massive – perfectly suitable for rock, rhythm, blues, and doom!”

While examples from the early/mid ’90s once surfaced on the used market for a few hundred bucks, Nicely notes they’re now much harder to find. When they do turn up, they fetch pretty big money, often pushing $1,500 and beyond – a decent rate of appreciation for an amp listed in the ’95 Sovtek NAMM catalog at $189 (likely dealer price). The MIG-50 was soon accompanied by the smaller Tube Midget (50 watts, with two 5881s), MIG-60 (more plexi-like, with Master Volume), MIG-100, and high-gain MIG-100H.

Inside, the circuit is constructed on a printed circuit board (PCB), which is decently rugged and neatly laid-out. Input jacks and potentiometers are mounted directly to the board with through-hole connections, which presents one of the design’s weak points, maintenance-wise. Also, the Russian pots aren’t the highest quality. That being said, most Sovteks of the era haven’t needed any more upkeep than similarly low-priced or mid-market PCB amps, and many have remained roadworthy for two and a half decades. Thoughtful touches like chassis-mounted tube sockets – connected to the board via flying leads – likely aided the effort, and mark a step up from many lower-priced tube amps.

Otherwise, in addition to simply being a stoutly rocking gig machine, the MIG-50 represents a nifty slice of latter-day Cold War history, and perhaps a thawing of East-West relations. As far as we know, there are no military secrets printed in the chassis, and rather than being some enigmatic instruction on how to use the amp, the Cyrillic legend beneath the inputs simply says, “Made in Russia, Saratov,” giving credit to the city that hosts the Sovtek factory.