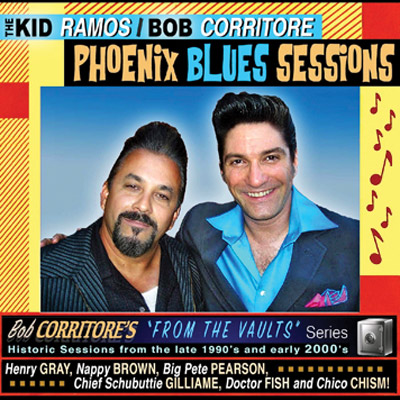 Ramos is well known in L.A. blues circles from his decades with James Harman, Janiva Magness, the Mannish Boys, Los Fabulocos, and others. As part of harpist Corritore’s “From The Vaults” series, this finds the pair in various settings from the late ’90s and early 2000s, with many tracks unreleased until now.

Six cuts featuring vocals by Nappy Brown and pianist Henry Gray are especially significant. Both blues legends are no longer with us, but they are in fine voice here.

Ramos’ six-string bite on “Snakes Crawls At Night” recalls John Lee Hooker. His reverbed tone and facility with slide (“Possum Up A Tree”), boogie (“Talkin’ About You”), and heavy shuffles (“No More Doggin’”) will bring to mind West Coasters like Junior Watson, Rick Holmstrom, and the late Hollywood Fats – about as high a compliment as a guitarist could receive.