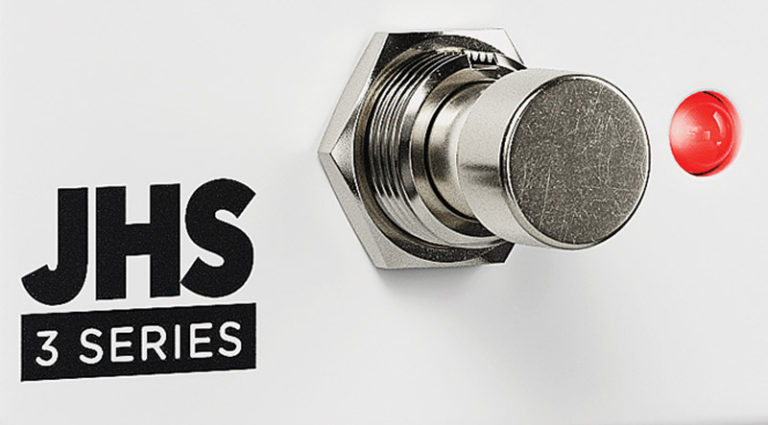 JHS’ seven new 3 Series pedals strip away cosmetics and frills. History has told us that simple pedal designs can sacrifice key elements. Is that the case here?

Presented in plain white aluminum boxes, the series includes an Overdrive, Distortion, Fuzz, Chorus, Delay, Reverb, and Compressor. And economy doesn’t end with the spare window dressing. Each pedal has three knobs, a footswitch, a mini-toggle, and an on/off light. “Intuitive” doesn’t begin to describe 3 Series pedals. Whatever it says under the knob is what it does – no more, no less.

So how do they perform? Clearly, money not spent on flashy paint jobs and pithy names turns up on the inside with quality components throughout. One of the most difficult effects to reproduce, for example, is the warm ambiance of a large room or hall. The 3 Series Reverb excels at sounds between what other pedals might call “Spring” and “Hall” with the mini-toggle that adds initial delay to give the sound an extra sense of spaciousness.

In fact, that mini-toggle might be the 3 Series’ secret weapon. On the Overdrive, it re-creates the op-amp soft clipping of ’80s ODs by increasing output. On the Delay, the toggle goes from analog-type to more-precise digital. It removes the dry signal from the Chorus, delivers the Distortion from metal to crunch, increases fatness on the Fuzz, and maintains high frequencies on the Compressor.

For tone connoisseurs with double-digit checking accounts, the JHS 3 Series offers a great tone at a great price. JHS has stripped away cosmetics and other unnecessary features to offer seven pedals that are high in quality and low in price.