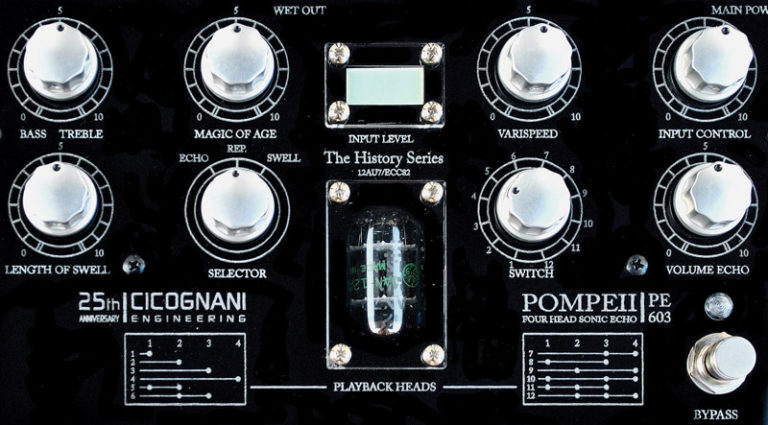 Cicognani Engineering has been making noise with a terrific lineup of amps and effects, earning raves from notable artists like Robben Ford, Kee Marcello, and Phil Campbell. Their Pompeii PP603 is based on the sought-after Binson Echorec P.E. 603 echo/delay.

While the original was used by many artists of the ’70s including Led Zeppelin, Hawkwind, and Pink Floyd (this pedal is named after Floyd’s Live at Pompeii, where the effect featured heavily), this modern re-creation is smaller and has an improved sonic spectrum. A plexiglas control panel and hammer-tone metal chassis are complemented by enough controls for hours of sound-tweaking.

We dialed in everything from organic slap-back up to 740 milliseconds to single repeats. The PP603 also features true multiple tape-head combinations with 12 selectable head settings and a 12AU7 preamp allowing for aural transparency and maximum-strength headroom. There’s a Swell Mode for reverb and a Varispeed control to create motor speed alterations to the modulation. The 12-position rotary Switch let us choose various tape-head combinations that yielded split-delay effects and multi-tap functions.

The PP603 adds an entirely new dimension to any rig while delivering warm echo, much like the original. Players can create lush, warm, and trippy sounds like it was the ’70s all over again. It ain’t cheap, but for guitarists who crave sonic authenticity, it’s tops.