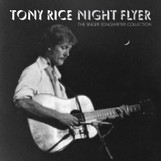 The title is a bit misleading. Tony Rice has penned music and lyrics for a few songs (including the one that leads off this album), but the title refers to his interpretations of the work of other singer/songwriters – although “Wayfaring Stranger” is a traditional folk song, author unknown.

Those who know Rice only from his nonpareil flatpicking, which was his sole job description in the original David Grisman Quintet and the subsequent Tony Rice Unit, may not be aware that he also ranks as one of the great bluegrass singers of all time. Unfortunately, mysterious medical problems caused his voice to fade to a hoarse whisper in recent years – no doubt helping inspire his excellent collaborations with Peter Rowan.

So, on the heels of the all-instrumental 58957: The Bluegrass Guitar Collection retrospective, this review of Rice as singer/guitarist is both logical and welcome.

Never one for genre restrictions, Rice comfortably dips into the catalogs of Dylan, Joni Mitchell, James Taylor, Mickey Newbury, and even John Mayall. Ian Tyson and Jerry Reed are also two of Rice’s favorites, and he’s probably the greatest interpreter ever of Gordon Lightfoot.

Unfortunately, most of the tracks are culled only from Native American and Me & My Guitar, with two from Cold On The Shoulder and none from the excellent Church Street Blues. Maybe it’s because the latter was a solo outing, and these are all ensemble arrangements (with folks like Jerry Douglas, Sam Bush, and Vassar Clements), but Ralph McTell’s “Streets Of London” or Hamilton Camp’s “Pride Of Man” would have fit perfectly here.

Ironically, the album’s standout is a surprisingly strong, previously unreleased rendition of Tom Waits’ “Pony,” cut with only piano backing, after Tony’s voice had begun to erode.

That Rice continues to dazzle on guitar is breathtaking; that the same person possessed a voice as bell-clear as his Martin puts him in a category shared by precious few.

Rick Fowler – Back On My Good Foot