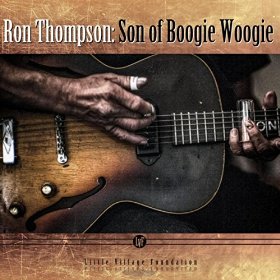 Ron Thompson has been a fixture in the San Francisco blues scene for more than 40 years. But rather than gaining visibility and rocketing to stardom like, say, Robben Ford, he patiently paid his dues in the trenches of ghetto clubs in decidedly unglamorous towns like Richmond, California, backing obscure bluesmen and 300-pound strippers. What didn’t pay off in fame paid off in seasoning, apparent in Thompson’s every note and phrase.

Recognition eventually came the 62-year-old’s way – heading John Lee Hooker’s band for seven years, and recording with Mick Fleetwood and Chris Isaak. Though he’s excellent on piano, straight guitar, and harp on a rack, slide guitar is Thompson’s strongest suit. He’s easily one of the best slide players in the tradition of Elmore James and Hound Dog Taylor, evidenced on James’ “Standing At The Crossroads.”

The CD was produced and engineered by another blues guitar great, Kid Andersen, at his Greaseland Studio – fast becoming the place in the Bay Area for authentic blues.