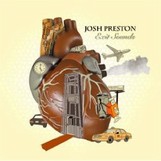 A few years ago, Josh Preston laid down his electric guitar for the life of singer/songwriter. Once past the slightly offensive notion that this move speaks of contempt for the music that changed the world, it becomes clear he probably made the right move; if your heart isn’t in it, move on.

When he did, the Maine-born Nashville based Preston placed himself in the arc of usually British guitar troubadours that has people like Ralph McTell and Roy Harper on the folky end, Richard Thompson on the rockier one, and John Martyn, Nick Drake, and Preston himself somewhere in the middle.

As a player, his skills are evident without him having to rely on solos (there are none, as such) and years of working electric gigs as a side man have taught him how to stay out of his own way. Preston makes gentle but not mushy music that, despite the CD cover’s symbolic illustration of an electric guitar with its switch plate yanked out, isn’t unpleasing to those whose tastes run to (as John Hiatt eloquently put it) “a Telecaster and a Vibrolux turned up to 10.” He avoids the flowery phrases and breathy pauses that drag down others of his type; and takes himself just seriously enough (“Leap Year,” “Thousand Years”) to sound intelligent and grown up but not pompous or self-obsessed.

John Pizzarelli – With A Song In My Heart