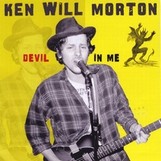 It’s hard for any artist to squeeze out one good album, much less two at once. It’s significant that Ken Will Morton hits more than he misses on these simultaneously released, but separately packaged, discs. Devil In Me covers his harder, White Stripes-type rocking side while Kickin’ Out the Rungs is more (but not exclusively) acoustic-guitar based. Neither dispels any notion that, growing up, this guy must have been a handful for his parents. If the choice was between putting him on Ritalin and buying him a guitar it seems they made the right choice to go with guitar.

There’s not much conventional about Morton. An effective singer, his voice is appealingly gig-worn. As a guitarist he is inventive and original and does a good job of expressing himself without depending on (recognizably) standard riffs. This works very well on Devil. There’s a definite air of self-exorcism when he cracks off lick after high-intensity lick. Like David Gilmour, or maybe even more like Neil Young, Morton is able to communicate his emotional state of mind through his almost anarchistic approach to the guitar. Playing, singing, or songwriting, Morton goes undeterred – and undistracted – where he wants to, and usually he gets there with the listener following willingly.

Rungs may be the more accessible of the two discs. Norton is neither tuneless nor anti-melodic, but his songs seldom end up where they started and he’s not much for hooks, which separates him from similar artists like, well… nobody. There’s a lot of rocker, some cowboy, some folkie, and some Nashville country in him, showcased in the Jayhakws-ish “Long Way Down.” And he is not shy about taking a sharp left in the middle of a song (“Fuddydud”). The effect is surprising, sometimes jarring, but Morton makes such detours work without turning them into MacGuffins.

Both discs feature all-original Morton compositions save for “That’s All Behind Me Now,” a highlight on Rungs co-written with Kristen Hall of the more traditional and significantly less provocative Sugarland.