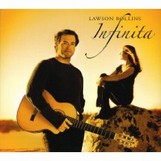 Fusions of classical and flamenco guitar with rock and jazz have yielded interesting permutations for years – from Strunz & Farah to Ottmar Liebert to Rodrigo y Gabriela. Lawson Rollins’ first solo effort, following four albums with the duo Young & Rollins, featuring Daniel Young, doesn’t try to “rock out” (no Zeppelin covers here), but it doesn’t need to. This music is brimming with passion and intensity, without abandoning subtlety.

Eclecticism is no longer especially innovative; it either works or it doesn’t. But it usually works best when combined with musicality and chops, and Rollins has both of those in abundance. His incorporation of various types of world music and their instruments and players is reminiscent of some of Gerardo Nunez’s work.

To that end, Rollins’ gut-string is accompanied by such world-class players as Brazilian vocalist Flora Purim, percussionist Airto Moreira, and violinist Charlie Bisharat, who trades off melody lines with the guitarist on “In Motion,” one of the CD’s 11 excellent originals.

From every standpoint – the playing, the compositions, the production, engineering (a warm, immediate sound) – this is a beautifully executed album of evocative guitar music. A soundtrack for anything you’d like it to be.