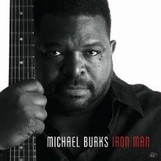 Michael “Iron Man” Burks isn’t the first or last talented musician to have to work a straight gig for most of his adult life, delaying the doing of what he was obviously born to do.

Burk’s nickname is appropriate for someone who stuck to his guns for so long. It would also fit his father, who schooled young Michael in the blues between dreary workdays in Milwaukee’s steel mills and refineries and nights playing bass in that city’s blues clubs; sometimes backing the likes of Aleck “Rice” Miller (a.k.a. Sonny Boy Williamson II). An injury forced the elder Burks to leave the factories and return the family to Arkansas, where he and his sons built and ran a popular 300-seat juke joint where Michael led the house band. Burks was 37 before he was able to hit the road in ’94 and begin wowing club crowds beyond tiny Camden, Arkansas.

Wielding a scorching Flying V, Michael Burks mines territory explored by Freddie King and 1960s British blues/rock bands like Savoy Brown and Free; his steady-churning cover of Free’s “Fire And Water” – co-written by Burk’s spiritual kinsman, guitarist Paul Kossoff – shows how well he does. Bearing a vocal resemblance to another King – fellow Flying V player Albert – Burks has hit his comfort zone as writer and recording artist on this third album for Alligator. Having his longtime road band record with him for the first time no doubt helped. Iron Man comes from a player who is not just good but working to be better.