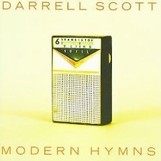 Darrell Scott’s latest CD highlights his performing prowess rather than his songwriting chops – all 12 cuts are covers.

This isn’t the first album on which Scott has displayed his interpretive abilities, but here he tackles a wider range of material. Song choices include Gordon Lightfoot’s “All The Lovely Ladies,” Guy Clark’s “That Old Time Feeling,” and Kris Kistofferson’s “Jesus Was a Capricorn.” Others are musically further afield, such as Pat Metheny’s “James,” Leonard Cohen’s “Joan of Arc,” and Paul Simon’s “American Tune.”

Regardless of the source, by the second bar, every song sounds like a Darrell Scott tune. He combines old-timey textures with modern tin-pan alley sensibilities in a unique way, luxuriating in the harmonies and changes of each song. Scott frames Adam Mitchell’s “Out Among the Stars” with a full a capella choir, then performs his most striking musical transformation with “Joan of Arc.” Mary Gauther sings the lead with a world-weary timbre while Scott delivers the answering “fire” part of their duet with an intensity that matches Cohen’s rendition from Jennifer Warnes’ Famous Blue Raincoat album.

To understand how a songwriter’s mind works, you must listen to how they perform covers. On Modern Hymns, Darrell Scott delivers 12 striking performances that illuminate his unique style.