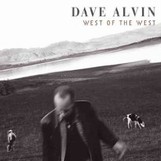 Dave Alvin is one of America’s best songwriters, and as such runs the risk of alienating casual fans when he does an album of covers. But then again, maybe not…

The idea with his newest disc, West of the West, is to pay tribute to songwriters from the West Coast, where Alvin grew up. That means is you get stuff like “California Bloodlines” from John Stewart, with its gorgeous changes and nice, melodic lead guitar from producer/string-wizard Greg Leisz blending nicely with Alvin’s acoustic. A bluesy, and very menacing version of Jackson Browne’s “Redneck Friend” features a fine vocal and stinging leads from Alvin. “Down On the Riverbed,” by his buddies in Los Lobos, gets a folk turn with fine banjo.

Alvin pulls out a wah pedal to highlight Tom Waits’ “Blind Love,” and grand treatments are applied to tunes by Jerry Garcia and Robert Hunter, John Fogerty, Merle Haggard, Richard Berry. And the surprise highlight is a stunning version of Brian Wilson’s “Surfer Girl.” It’s laid back and sparse, with marvelous harmony vocals from the Calvanes.

The record does on occasion sound like someone treading water to his next effort, but the effort nonetheless is valiant, and Alvin never fails to sound soulful.

The Great American Music Galaxy is a CD that Alvin originally sold at concerts. Alvin and his band deliver live on great cuts ranging from old Blasters standards to new stuff. Dave and Chris Miller handle the guitar work, and when they stretch out, it’s a joy to hear.

These two records show Alvin at the top of the heap amongst those who record what he once referred to in song as “American Music.”

This article originally appeared in VG‘s Oct. ’06 issue. All copyrights are by the author and Vintage Guitar magazine. Unauthorized replication or use is strictly prohibited.