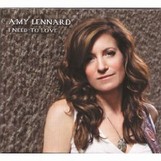 Amy Lennard writes with the declarative clarity and unvarnished eloquence of a musical Stephen Crane. But don’t let the literary comparison mislead, she’s no smarty-pants poseur, no distaff Beck. Lennard, a native New Yorker, is a straight shooter. Her country-flavored “singer/songwriter rock” has crackling energy and a city girl’s savvy; not unmarked by the real world, she’s not intimidated, either. She knows what’s up. “There’s a world of things I could change if I wanted to. But I can’t change you,” she sings in “I Can’t Change You,” one of several songs on I Need To Love that features Oz Noy on electric guitar. The stylistically wideranging Noy knows when and what elements to grab from his comprehensive, eclectic bag of resources, managing to stand out evening Lennard’s forceful presence.

Lennard produced this disc and, like Noy, sees the big picture. She hits the right balance without gimmickry, assembling all parts to work in service to the songs and surrounds herself with an outstanding crew. Craig Bennelli and Josh Caban take up the slack when Noy isn’t on guitar. Tony Tino, Shawn Pelton, and Bennelli handle the tricky job of making drums an organic part of what is basically a folk ensemble. But mostly, Lennard rightly relies on her unerring musical sense and insightful songwriting, her romantic realism. And she has this stunning debut to show how well that works.