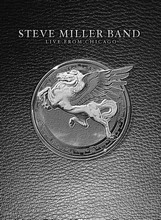 Producer/director Daniel E. Catullo has helmed DVD presentations from Godsmack, Rush, and the Dave Matthews Band. On this set (CD and two high-def DVDs in 5.1 surround) he utilizes that experience and state-of-the-art technology to present the five-man Steve Miller Band in footage from a 2007 show at Chicago’s Ravina festival.

With 17 cameras catching every angle of the performance, Catullo keeps superfluous cuts showing the audience to a minimum, focusing on the action onstage. The result is a feeling of being right there with Miller and his impressive ensemble. Particularly gratifying are the closeups of players’ hands – especially Miller and guitarist Kenny Lee Lewis – during their solos. This savvy attention separates Catullo from most television directors who, after 50 or more years of rock and roll being broadcast on TV, still feel the action stops when the singer isn’t singing.

Miller is something to see; of course, someone who had Les Paul as a godfather and T-Bone Walker as a frequent visitor to the family home was almost certain to grow up to be a pretty good guitar player. Fans of Miller from the blues/psychedelia music he made before his sharp career turn with 1973’s The Joker won’t be surprised by the results of that fortunate nurturing. But many who know Miller mostly from The Joker and the monster hits that followed it, or who were put off by their endless airplay in the 1970s and ’80s, have a treat in store. Sure, those chord-driven/hook-laden tunes had quite a shelf-life. But Miller doesn’t play them as obligations to be met; grudgingly ground out for those whose entertainment dollars helped finance the tantalizing array of vintage Telecasters, custom Bolins, and other enviably fine guitars he employs in concert. The show is heavy on songs from two of his biggest albums – 1976’s Fly Like An Eagle and ’77’s Book Of Dreams – and Miller plays his hits with good-natured enthusiasm; using them as launching points for spectacular interplay between himself and Lewis, who has been working with him onstage and off since the early ’80s. Miller even updates the show opener, “Fly Like An Eagle,” with a brief, spirited rap from keyboardist Joseph Wooten, whose interplay with the rest of the band serves as a binding thread.

The CD contains 12 cuts culled from the concert. DVD disc two contains credits, a photo gallery, and two videos of Miller and San Francisco-based journalist Joel Selvin in a motor tour of Miller’s adopted hometown of Chicago. In them, Miller tells of being a young player benefiting from the serendipity of being able to jam with and learn from the likes of Muddy Waters, Howling Wolf, Paul Butterfield, and other icons. The stories are worth hearing. But more of the great concert footage would have been a definite plus.


This article originally appeared in VG‘s July. ’08 issue. All copyrights are by the author and Vintage Guitar magazine. Unauthorized replication or use is strictly prohibited.