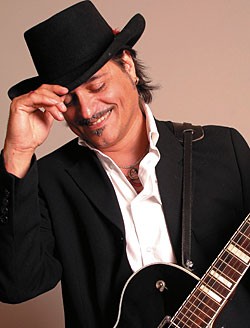 Journeyman guitarist Frank Carillo has been plying his trade for decades, and along the way jammed with/for numerous legendary bands.

Born in Brooklyn, New York, and raised in Queens, Carillo moved to Long Island in his teens and, soon after learning to play guitar, developed a love for Gretsch instruments.

“My dad took me to the Gretsch factory in Brooklyn in 1961,” he recalled. “And I got my first good acoustic there – a single-cut archtop. Then in 1962 I got a Gretsch Country Club in Cadillac Green.”

The ’70s saw him playing a Gibson Les Paul until he rediscovered Gretsches in ’79. “Nobody really wanted Gretsches at that time, so I picked up a ’57 Country Club with DeArmond pickups for $300,” he recalled.

One of Carillo’s first claims to fame was working in England on two of Peter Frampton’s early solo albums. The other guitarist was Bob Mayo, who spent many years in Frampton’s band. Carillo then formed a band called Doc Holliday, which was influenced by the English blues and rock and roll movement. They recorded at Olympic Studios, where producer Chris Kimsey had worked on the Rolling Stones’ Sticky Fingers and got permission for Doc Holliday to use the Stones’ gear on their own record. At Olympic, the band also jammed with Led Zeppelin.

In the late ’70s, Carillo pursued a solo career and opened for a number of bands, including Van Halen, Cheap Trick, Bad Company, Tom Petty and the Heartbreakers, and the J. Geils Band. He was using a 1960 Les Paul Custom and a ’62 Fender Stratocaster when he opened for Bad Company on a ’79 tour during which his band’s gear was stolen. “Bad Company loaned us all of their gear for three shows,” he said. “Eventually, ours was found [except for] my guitars.”

Over the years, Carillo has also collaborated with several female singers, co-writing songs for Carly Simon and Joan Jett. He spent several years in a duo with singer Annie Golden; they recorded two albums, Fire In New Town and Toxic Emotion. More recently, he has co-written with Golden Earring and played in John Hammond’s band live and in the studio on Ready For Love.

In ’05, Carillo recorded Bad Out There, which garnered airplay and critical praise. A second album with the same band, Someday (’08), continued his straightforward approach. Keyboard player Augie Meyer contributed to four tracks.

Carillo has retired his early Gretsch Brian Setzer model from the road, but uses it extensively in the studio. 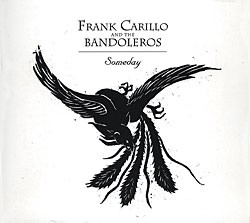 While many tunes on Someday contain sociopolitical commentary, Carillo doesn’t consider them to be protest songs.

“‘Burn the Whole House Down’ is basically saying, ‘Open your eyes, this whole place is gonna burn down if we don’t wise up to greed.’ I write about things that are happening. I liked the writing of Ray Davies of the Kinks; he’d write like a reporter, about what was going on.”

The leadoff track (“Roll the Bones”) sets the pace with a rude-but-listenable solo. “I used the neck pickup on the Brian Setzer Gretsch to get that ‘dirty and dark’ sound because the song is kind of dark. My brother played a Fender Tele, and I played a (Gibson) Hummingbird for the acoustic part.”

“Darkness Everywhere” has Carillo on two acoustics. “I played an all-mahogany Martin 00-15 for the high part and a Gibson Hank Williams Jr. Southern Jumbo for the lower parts.”

Explaining the track’s minimalism, he says, “I always loved Slim Harpo and the ‘Hip Shake’ groove, and always wanted to write a song with one chord. Everything was cut live except for the backing vocals and the harmonica.”

“Eastern Time” was inspired by a trip to China and Thailand. “It was like another world,” he recalled, “I actually wrote it in Arizona, on an old Spanish laud. It’s a smuggling tune, but I mentioned a lot of the places we visited, like Kowloon and Hong Kong. I travel a lot and I see a lot of things… and they kinda creep into my head!”

His travels and years of roadwork have proven invaluable to his songwriting. “Even if a songwriter makes up a story, I think it’s great to color it with your own little experiences.”


This article originally appeared in VG‘s December 2008 issue. All copyrights are by the author and Vintage Guitar magazine. Unauthorized replication or use is strictly prohibited.
Frank Carillo and the Bandoleros- Bad Out There)
The Guide