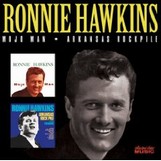 To call these two early records by Ronnie Hawkins “historic guitar recordings” is a genuine understatement. In fact, they’re revolutionary. But first, who is Ronnie Hawkins? The Hawk was a rock shouter from the post-Elvis era, one of many who tried to turn the King’s formula into gold. Hawkins moved to Canada in 1958 and gradually acquired a cadre of musicians that later morphed into The Band – Richard Manual, Levon Helm, Rick Danko, Garth Hudson and guitarist Robbie Robertson. And it’s the 18-year-old Robertson who’s the man of the hour here.

Mojo Man was recorded in New York City in 1961 and, within its grooves Robertson plays guitar solos that were pushing the envelope in rock-and-roll circles. Surely, he had been listening to the top Chicago bluesmen like Buddy Guy and Otis Rush and perhaps B.B. King, too. As a result, he was already playing blues guitar at a level not rivaled by white guitarists until several years later. The only contemporary you can compare Robertson to would be Lonnie Mack, but his important recordings also occurred later, in 1963-’64. And then there is Robbie’s distorted guitar tone, another incredible rarity for that era (though predated by various bluesman, as well as rockers Paul Burlison and Link Wray).

Now for the music: Listen to Robbie solo on “Suzy Q.” In this version, Robertson tears it up with dark, reverby solos laden with string bends and growling doublestops. Same goes for “Matchbox,” whose ferocious solos are filled with matched-pitch bends. And from the Arkansas Rockpile record of 1963, there’s the landmark “Who Do You Love?” Again, Robertson demonstrates his prowess with fierce, reverb-stoked leads – breaks that could have been on any psychedelic San Francisco record cut four or five years later.

The larger point here is that Robbie Robertson’s playing on these records was far ahead of the curve – ahead of Clapton, ahead of Bloomfield, and even Hendrix or Beck. But just how influential these records were is not so clear. Since rock and roll was highly regionalized 45 years ago, one wonders how much impact a Toronto-based band would have had outside that immediate area. If nothing else, we have these recordings, which clearly position Robertson’s name in a critical location on the rock-guitar timeline. At a period of time when early rock guitar was already a cliché and California surf guitar was just getting off the ground (and blues-rock guitar was just a burp on the horizon), here was a teenaged Robbie Robertson laying down raw, visceral six-string history. It’s great, important stuff.