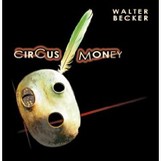 Walter Becker is the stringed part of the Steely Dan equation, and like partner Donald Fagen has taken his time coming up with a solo record to follow his 11 Tracks of Whack from 1994.

This album is dominated by sinewy, jazz-based songs with slinky guitars, funky bass, and lots of odd keyboard and horn charts. Becker mostly plays bass, like in the early days of Dan. But he also plays several guitar solos. Other guitars are from familiar (to Dan fans, at least) names like Jon Herington, Dean Parks, and Larry Klein, a bassist who has played for and produced numerous artists.

Becker’s voice is an acquired taste, containing little of the soul, wit, or sarcasm Fagen adds to the songs the two wrote as a team. It’s monotone, but has improved greatly since the last record. His writing is just what you’d expect – lyrics tell of situations you want to see only from the outside, not be part of. “Somebody’s Saturday Night” is full of the expected humor, while “Bob is Not Your Uncle Anymore” has a great lyric. Musically, the songs lean in a couple directions. The funk of cuts like “Somebody’s Saturday Night” is lean and tight, and “Three-Picture Deal” even brings a bit of stylish disco in its chorus. But the island apparently has been calling Becker lately, as there are strong elements of island styles on many of these songs. It works well, especially given the oddness of some of the lyrics. While far too much time passes between doses of Becker/Fagan music, it’s always worth the wait.