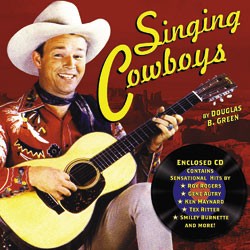 In his interview in the October ’06 issue of VG, David Lindley talked about what grabbed his attention prior to rock and roll. “There was cowboy music,” he said. “I loved western music, like Sons Of The Pioneers. Not bluegrass, not hillbilly music; it was Gene Autry, Doye O’Dell, Iron Eyes Cody and Tim McCoy. I loved it. Because all kids, when you’re seven or eight, want to be a cowboy.”

Singing Cowboys, published by Gibbs Smith, is a lavishly illustrated, engrossing look at those bygone stars. And who better to write such a tomb than Douglas B. Green, better known as “Ranger Doug” of the Riders In The Sky, the Grammy-winning group that has been keeping that tradition alive for 30 years and as many albums. Green’s resume also includes a gig as editor of The Journal Of Country Music and a stint with Bill Monroe’s Blue Grass Boys.

The 144-page book, which measures 10″x10″, includes a 30-minute CD, featuring nine songs by stars featured in the book and one by a pioneer who isn’t – Patsy Montana, yodeling “I Want To Be A Cowboy’s Sweetheart.” Each of its succinct 56 chapters is devoted to a different singer or band, laid out alphabetically for easy glancing.

There are superstars like Roy Rogers, Gene Autry, Tex Ritter, and the Sons Of The Pioneers, alongside lesser-known actors like James Newill, who played a singing mountie. There are also singing cowgirls like Jane Frazee, would-be Latin cowboy Warner Baxter (as the Cisco Kid), and black singing cowboy Herb Jeffries, who along with starring in films like “Bronze Buckaroo” and “Harlem Rides The Range,” toured and recorded as vocalist with the Duke Ellington Orchestra.

And then there are the guitars! “One of the things I loved about putting together the pictures for this book was drooling over the incredible guitars,” says Green. “So many of the singing cowboys played outstanding, historic, and beautiful guitars – Ray Whitley’s J-200 and Gene Autry’s 12-fret D-45 chief among them. Tex Ritter had several wonderful Martins and, I think, three J-200s; Roy Rogers had a bunch of fine guitars [including the Martin 00-21 that he’s strumming on the cover and the Super 400 he’s pictured with inside]; Gene Autry had a world class collection; and check out Tex Fletcher’s left handed 00-45! Many of the cowboys who came through Chicago – Autry and Rex Allen, particularly, and also Patsy Montana – played Prairie State/Larson/Mauer guitars, often festooned in pearl.”

Speaking of Patsy, why isn’t there a chapter on her? 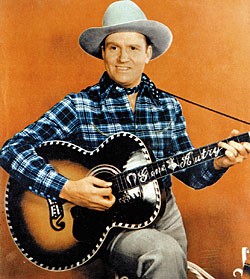 “My criteria,” Green explains, “were that the actors featured had to have either starred in at least one film – been the headline act – or have appeared in so many as musical support as to make them indispensable to the story. So Patsy Montana wasn’t covered because, even though she had a great career in western music, she only appeared in one western. Yet Penny Singleton, never known as a western star, did fully headline one musical western picture, so she made the cut. To include everyone who sang in a western film would have made the book too heavy to hold and gone far beyond the scope of my extensive but, let’s face it, limited knowledge.”

Actually being able to play the guitars they were holding was not a requirement – for the author or the movie studios. “I’m pretty sure the parlor guitars shown were studio props. Several of the singing cowboys were classically or Broadway trained singers and not musicians in the folk sense. Smith Ballew played banjo in big bands and presumably could play a guitar, but I doubt if Fred Scott or Dick Foran could play a chord. They probably mimed whatever prop guitar the studio handed them.”

Ray Whitley, on the other hand, co-designed Gibson’s J-200. Green notes, “Gibson seemed to give superstars like Gene Autry, Jimmy Wakely, and others considerable latitude in customizing existing models, like Autry’s prewar J-200 with unusual binding – I presume to give the impression of a rope. Beautiful guitar!”

You’ll probably finish reading the book in one sitting, but will undoubtedly pick it up again and again to gaze at the pictures. The art direction has a lush feel to it. Green says, “As a guitar player myself, I can tell you that many of the photos were chosen because they gave such beautiful views of some of the rarest and most beautiful guitars in acoustic music history. These guys brought the guitar to mainstream America during the Depression, made it popular and cool, and had the money and the taste to help the builders make some incredible, gorgeous instruments.”

And one singing cowboy that shouldn’t be overlooked: Ranger Doug himself, shown strumming a beautiful late-’40s Stromberg DeLux on the dust cover.


This article originally appeared in VG‘s February 2007 issue. All copyrights are by the author and Vintage Guitar magazine. Unauthorized replication or use is strictly prohibited.
Ranger Doug – Sweetheart I’m All Alone Tonight