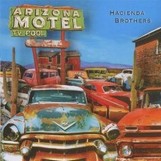 Arizona Motel is the last album we will ever get from the Hacienda Brothers. The death of lead singer Chris Gaffney in April has ended the five-year run of the best country band of the decade, and sealed their legacy.

The Hacienda Brothers’ great achievement was the melding of country, soul, blues, rockabilly and swing into an ageless sound that was more than the sum of its parts. They did this through a dedication to immaculate songwriting, flawless recording, and persistent touring.

The band says this will be its last release, and on it the Brothers adhere to the framework built with their own hands: powerful, cool tunes dealing with life and living. Their aim always was to make classics, whether it be one of their own or someone else’s. Arrangements, dynamics, and individual performances were always there to improve, support, and showcase the songs. This album delivers more moments of greatness, more consistently, than any of their previous releases and is a fully realized work of music-craft.

And it kicks butt. Guitars figure heavily on Arizona Motel, with Dave Gonzalez (co-leader, songwriter, and guitarist) and steel guitarist Dave Berzansky serving up a treasure trove of sublime riffs and fills. Pianos and organs fill in key background sections. Rhythms are tight, and the pace never lags.

Guitar players and car cruisers will latch onto the instrumental “Light it Again, Charlie.” “I’ll Come Running” is a stone country tune with a quick beat that recalls early Paycheck and Owens. “Uncle Sam’s Jail” is a dark tune for a dark subject, telling the story of a young man in war. “Big Town City” and “Long Way to Town” are Gonzalez-penned tunes that reflect his classic country influences. Through it all, Gaffney and Gonzalez deliver world-class vocal performances that demonstrate just how good they got over their five years together.

Which brings us to the second tragedy of the end of the Hacienda Brothers, the dissolution of an all-time-great band of players. In their time together each member improved their chops many times over from where they started in 2003. Back then few would have thought Gonzalez could actually become a better guitar player, but he did by adding a lifetime of country riffs to his already overflowing tool chest. Dave Berzansky came into his own as one of the top pedal-steel talents in the country, first emulating and then expanding upon the key styles of the instrument. The rhythm section of Hank Maninger on bass and Dale Daniels on drums made the velvet hammer an art form, giving the band a restrained, powerful groove.

Posthumous releases occupy a twilight between existence and oblivion. Examples include the Doors L.A. Woman, Otis Redding’s The Dock of the Bay, Joe Strummer’s Streetcore. Full works (not odds and ends compilations) released after the death of the artist have the power to haunt and create emotions far beyond that of the actual songs. “Soul Mountain,” the standout track of Arizona Motel, and the only one penned solo by Gaffney, could haunt if it weren’t so damn uplifting. Not known for sweetness and light, the true heart of the man people still refer to reverently as “The Gaff” shines brightly and offers to take us to a better place. A gospel song dipped in heavy soul sauce, “Soul Mountain” has buildups, breakdowns, and full-on gospel raves. It stands as Gaffney’s championship moment, glove held high and forever the soul of the Hacienda Brothers.