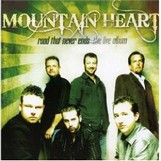 Mountain Heart plays music its own way. What makes the band so different? Breadth. While most bands narrow their scope to one particular sound, Mountain Heart pushes boundaries past traditional bluegrass into other popular musical forms.

This album was recorded in one take at a club in Michigan. From the opening introductions through the final song Mountain Heart captures the crowd’s complete attention. These guys are great showmen.

The set begins with a blistering version of “Road that Never Ends” featuring hot solos by Barry Abernathy (banjo), Adam Steffey (mandolin), and Jimmy Van Cleve (fiddle). Super-fast paced songs are standard fare for a top-flight bluegrass band, but after a couple more barnburners, Mountain Heart radically shifts gears and begins to show their depth with the honky-tonk elbow-bender “Who’s the Fool Now?” But its most radical departure from standard bluegrass fare is an a capella rendering of “Gospel Train,” with six part harmonies and a vocal technique they refer to as “nose horns.”

After this vocal tour-de-force Mountain Heart takes another left turn with a 12-bar blues called “It Works Both Ways.” The final song of the show, the Van Cleve instrumental “#6 Barn Dance,” reveals the band’s modern acoustic music side as they stretch a fiddle tune into more musical shapes than a piece of warm taffy.

The Road That Never Ends is a must-have for not only Mountain Heart fans, but anyone who appreciates masterful music recorded live with no “fixes” or overdubs.


This article originally appeared in VG‘s January ’08 issue. All copyrights are by the author and Vintage Guitar magazine. Unauthorized replication or use is strictly prohibited.