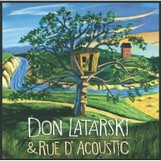 Don Latarski is a fine guitarist who has produced recordings to go along with his wonderful live work. His work with Rue de Blues was a great mix of R&B and soul. Here, he changes the scenery with the acoustic jazz of Rue D’Acoustic.

Very notable here are the compositions. With an acoustic trio, it might seem hard to keep things interesting. Not here. Pretty much every cut has a great musical hook; the melody of the opener, “Acoustic Evidence,” sticks around as the song works itself over what feels like different movements before returning to that melody. Latarski shows off his harmonic skills on cuts like the ballad, “June in Waiting,” where he darts in and out of the changes while the notes from his acoustic take on a certain liquid feel. Don’s rolling fingerpicked changes and great melody propel the tune “Bramble On.” The middle takes on the kind of funkiness one doesn’t often associate with acoustic guitar. “Autumn Slide” is a ballad that feels – to its credit – a little off-kilter. The breezy “BlueAzz” is a beautiful changeup where the trio (Latarski, Mark Schneider on bass, Jason Palmer on drums) shows it’s not afraid to move to straight-ahead pop. Don’s double stops and single lines form the perfect solo.