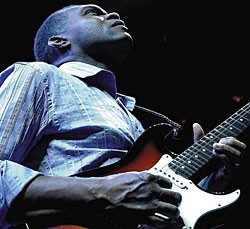 You’d think a guy who has been making great records since the early 1980s, puts on a great live show, and is respected by his peers would have released a live record before 2006. Robert Cray’s new double-CD, Live From Across the Pond, isn’t exactly the first attempt at getting the Robert Cray Band’s live sound to the public.

“The thing is, we’ve made attempts in the past and it always puts a lot of pressure on myself and everybody else in the band. It never really pans out the way you want it to for that one night, but it’s the anticipation – everybody knows the button has been pressed and you’ve got to do it right.”

Cray and his band – Jim Pugh on keyboards, Kevin Hayes on drums, and Karl Sevareid on bass – solved that problem last spring when they opened seven nights for Eric Clapton at Royal Albert Hall in London. “It gave us a chance not to think about the machines. We were just trying to get some new fans.”

For those lucky enough to have caught Cray in concert, this will be a real joy. And for those who haven’t had the pleasure, it’s a perfect capsule of what the band does live, right down to the noises Cray makes while soloing.

“Yeah, it’s just gruntin’ and groanin’ – I’m just trying to get what I want. I guess it’s just a habit that’s hard to shake!” he says with an embarrassed laugh. “We actually had to turn it down a little bit for the live record.”

The set list is varied and adequately spans Cray’s career. Classic cuts like “Phone Booth,” the blistering “Our Last Time,” “Bad Influence,” and “Right Next Door” mix with great new songs like “Poor Johnny,” “Twenty,” and “12-Year-old Boy,” a hardcore blues cover of the Elmore James story of love stolen by a kid.

“We were doing 40-minute sets and changed up a few every night,” he noted. “We don’t work with a set list, but we do have a song list of about 30 to 35 songs that I use in case I get stuck.”

Cray says that air of mystery surrounding the songs helps the band stay loose, and could be one of the reasons they’ve worked together for so long. “We have a good time. We’re friends and everybody participates in the songwriting and arranging. Also, not using a set list and turning around and calling songs to the guys keeps everybody on their toes and makes it fun.” 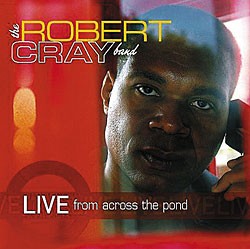 The sounds on the record are trademark Cray; solos bite and sting where needed, and soothe things over at other times. He says the equipment was the same as he’s used for several years. “I just used my Fender signature Strat. I go back and forth between several. I use two Matchless Clubman 35s running together, and sometimes we use a stereo vibrato that’s a remake of the Magnatone. It’s a rack-mount unit that was made by our guitar tech, Greg Zaccaria. I also use the TC Electronics 2290 for delay on a couple of tunes. For reverb, I use a Peavey Valve Verb.

Writers like to make a big deal out of Cray’s career, which seems to have shifted from bluesman to soul man. But he says he’s never really noticed a difference.

“A lot of people considered us a blues band, obviously, from day one. But the evidence is there that we did different things besides blues. We just let what happens, happen, myself included. I listen to a lot of different things and when I sit down and write a song, I don’t tell myself I’m going to write a particular kind of song, you know? Like I said, whatever happens, happens.”
The order that happens isn’t uniform either. “Sometimes I get an idea for a story, like ‘Twenty.’ That lyric came first and then the music kind of followed along. For ‘Poor Johnny,’ it was a melody I had from four years ago and I went back and revisited an old cassette tape I had. I said ‘I gotta use that one.'”

Though Cray admits to listening to a lot of music, it usually doesn’t happen when the band is on the road. With a laugh, he says, “We like to consider ourselves part of a group called ‘Musicians Against Music.’ We get picked up to go to a gig and if the guy has music on we’ll politely ask him to turn it off. The term came from, I think, our drummer. When you’re on the road and once you get off, it kind of takes a little while to actually want to sit down and listen to something. I’ve got CDs here that haven’t been opened for years.”

Cray says practicing can also be a problem for him. He grabs the guitar mostly for gigs or when an idea strikes him. “I’ve always been bad about fitting time in to practice. I envy our bass player, Karl. He takes his bass everywhere. And going out on tour with Clapton, I see Derek Trucks with his guitar in hand all the time. But for some reason, I don’t do it. I think my attention span is short these days.”

Listening to Live From Across the Pond, you’d never know he hasn’t been working to keep up his chops. And if you were lucky enough to see him with Clapton on tour, you caught his band doing a blistering set, especially when he joins Clapton, Trucks, and Doyle Bramhall, Jr. for several songs during Clapton’s set. It’s a rare treat to see all those guitar slingers performing together for part of the evening.


This article originally appeared in VG‘s January 2007 issue. All copyrights are by the author and Vintage Guitar magazine. Unauthorized replication or use is strictly prohibited.
Robert Cray Band – phone booth
Current Issue