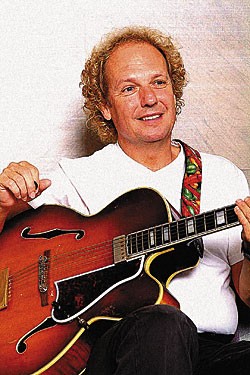 Lee Ritenour’s solo career continues to glide along with the release of his latest record, Smoke ‘n’ Mirrors, which contains exactly what we’ve come to expect from the veteran guitarist – and a lot more.

“It’s really, for lack of a better word, a world-music album, through the eyes of my guitar,” he said. “More than that, though, it seems like percussion was the link in the sense of different percussionists from different countries. I got to use some old tried-and-true players and then a couple of new ones.”

While all of that is true, the album is ultimately propelled by Ritenour’s interesting, soulful, and chops-filled playing. His interest in various forms of music is nothing new. Growing up, his instrument led him to various genres.

“I liked everything about the guitar. I liked anyone who could play the s*** out of the guitar,” he noted. “I didn’t care if it was a folk guitarist, or jazz, or rock, or country. It didn’t matter if it was James Burton, Chet Atkins, Hendrix, Wes Montgomery, Segovia, Albert King, Bloomfield, Clapton. That’s why there’s been such a diverse sort of music coming out of me for 40 years.”

Ritenour grew up in L.A. and was fortunate to hit the studios early. “I did a session at 16, produced by John Phillips. That didn’t go anywhere, but he invited me to play on a track with the Mamas and Papas. From there, I just started meeting people. Dave Grusin was very busy writing, and he started using me. For other producers that was like, ‘Well, if Dave is using this young guy, Lee…’ That was pretty much it – my entrée into the studios.”

There was, of course, help along the way, Ritenour notes, by teachers like Duke Miller, Howard Roberts, and even a couple of lessons from Joe Pass and Barney Kessel, all great jazz players who also did session work.

“I was lucky to grow up in L.A. because that was a great period for guitarists. The studios were just smoking. There was lots of work and I had the opportunity. Back in those days you needed live musicians. That’s not the way it is today.”

As you’d expect for someone who’s played so many sessions, he remembers some specific ones. “Oh yeah, there’s been lots. Like Pink Floyd’s The Wall. I came in with this huge guitar rig and lots of guitars only to be bested by David Gilmour with about 21 guitars sitting in stands. They were all vintage Les Pauls and Strats. And I always liked working with Quincy Jones. His sessions were amazing, and the variety was so cool. I got to work on some of George Benson’s records as a rhythm player. Quincy would hire me on stuff like ‘Give Me the Night’ to design George’s sound and bring it up to date.”

Being in the studios in L.A. in the ’70s inevitably meant interaction with Donald Fagen and Walter Becker, of Steely Dan. “They called me quite often, but I don’t know what their deal was, they’d always call at the last minute. I was usually working, so I couldn’t work with them too often. I did get to do some work on Aja. They’re just such perfectionists. So, even if you were playing a simple rhythm part, you played it for hours and hours and even days and days until it was absolutely perfect. It was not quite as much fun to work with them as it was to listen to and enjoy the final project. But their music is great, and they’re great musicians. I’m very respectful of those guys.”

Ritenour’s favorite guitars are those that have been in the fold for a long time. “My favorite is probably my 1945 Gibson L-5 that my dad got for me when I was 13. I told him it would be the last guitar he ever bought.” With a laugh, he adds “That was not true.” It was purchased from an L.A. musician who was moving to Las Vegas. “We picked that guitar up for $600. About 12 years ago in Japan, a collector offered me a hundred grand for it!” “Rit” also favors a Gibson that Mike McGuire at the Custom Shop designed with him. “We copied the neck of my L-5 and the body’s a little smaller, not quite as wide. So, it’s really comfortable and plays great and sounds great. I also have my Red 335 Dot. It’s a 1960. I’ve had it since I was 17. As far as acoustics, I have a 1974 Yamaha Classical that was hand-made by a luthier who studied with the Ramirez family. That guitar’s been on pretty much every one of my records.”

Ritenour admits to “having lots of Mesa Boogies” throughout his career, and still favors the Road King. “I actually have a kind of combination. I use the Road King with a 2×12 Boogie speaker cab as a middle setup. On the left and right for stereo, I use two Fender Vibroluxes.”

Since becoming a solo artist and not doing studio work, he has done a variety of projects, including tributes to various artists like Bob Marley, a collaboration with fellow guitarist Larry Carlton, a beautiful labor of love dedicated to his hero, Wes Montgomery, plenty of diverse solo projects, and was one of the founding members of Fourplay, before leaving them to concentrate more on solo work. He’s hard at work right now on a record with another frequent collaborator, keyboardist Dave Grusin. “I’m really excited about it. It’s kind of a followup to a record we did in 2000, called Two Worlds. I’m playing a beautiful Ramirez on the record. It’s with an orchestra and is very challenging.”

Given his upbeat attitude, it’s easy to see why after 40 years in the music business, Lee Ritenour is still at the top of the guitar game.


This article originally appeared in VG‘s July 2007 issue. All copyrights are by the author and Vintage Guitar magazine. Unauthorized replication or use is strictly prohibited.