World’s most desirable amplifier? Aside from any “standard” vintage amps that have been elevated through their associations with major artists, the few original-design, made-by-hand amps out there that wear the Dumble and Trainwreck brands have long been the two most desirable lines on the planet.

Given that tone guru Ken Fischer is no longer with us, Trainwrecks are arguably fixed to an even higher standard by the laws of supply and demand. Please welcome, then, this rare appearance of “Nancy,” an early Trainwreck Express model built by Fischer in 1986 in his New Jersey shop. One of what is believed by its maker’s own estimation to be “probably 100 Trainwrecks in the world,” Nancy (Fischer used feminine names on his amps rather than serial numbers) is nevertheless no under-glass collector’s piece, but a living, (fire) breathing tone machine that has continued to pay her way in the hands of hard-working musicians since rolling out of the shop 23 years ago, and that’s more than you can say for a lot of $35,000 vintage gear out there today.

Owned for the past five years by guitarist and producer Matte Henderson, who has worked with everyone from Henry Kaiser and Robert Fripp to Jewel and Natalie Merchant, Nancy was previously played for many years by a hard-gigging guitarist from Texas, whose taped-on notes “5” and “6” still adorn the input and speaker outs, reminders of which cable goes where.

Although Fischer maintained two relatively steady models in the Liverpool and the Express, and added the Rocket to the lineup a few years later, each amp really was an individual creation, and no two were ever exactly alike. Each was tweaked to suit his evolving notions of perfect tone, and to meet the desires of the player for whom he was building it, and components also varied throughout the decade and a half that he was manufacturing amps. Recalling his first encounter with Trainwreck, Henderson tells us, “Henry Kaiser invited me to California to record with him in 1990, and he had eight Dumbles at the time, so I was really looking forward to trying those. When I got there, he said, ‘I just got this amp here…’ and plugged me into a Trainwreck Liverpool. I just went, ‘Oh my God, I’ve got to get one of these!’ So I bought a Liverpool from Kenny, and an Express after that.” In addition to becoming a customer, Henderson also acted as a handy phone demo guy for Fischer: potential customers would discuss the amps with the maker, then call Henderson for a quick over-the-phone playing demonstration to hear what they sounded like. 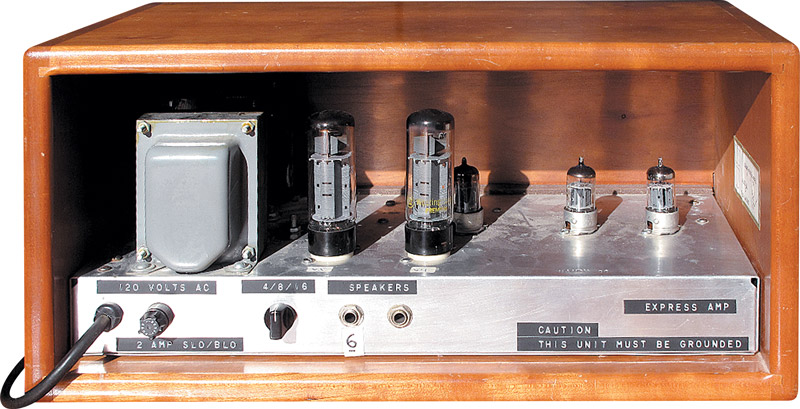 The Liverpool and Express are differentiated, most obviously, by their use of four EL84s and two EL34s, respectively. As a result, the former is usually referred to as being “Voxy” to the latter’s “Marshally,” though every one of each model is also quite different from either of those vintage British brands. Nancy further differentiates itself from later Expresses by being one of the earlier versions made with the Stancor transformers from the Chicago Standard Transformer Company, which Fischer used from 1985 to ’89. As Fischer himself related, “In 1989… Stancor stopped making those transformers, so I bought up all they had left of those to get me through the year with a few spares.” Post-1990, he used “…about 12 different transformer companies.”

Aside from merely being historically interesting, the use of Stancors in the earlier Expresses such as this one also signaled a different sonic signature. Where later “black tranny” Expresses leaned more heavily toward high-gain tones, the Stancor Trainwrecks, though still plenty gainy when you want them to be, had a slightly browner, more vintagey blues-rock vibe. “It’s more of a small-box ’68 Marshall,” Henderson confirms. “Tube tuning is what these amps are all about; they run fairly low plate voltages (around 380 volts DC on the EL34s).” What really makes Trainwrecks tick, of course, is the circuit going on underneath the hood, and more than that, the way Fischer laid out the components, connected the wires, and selected individual resistor and capacitor types and values by hand to fine-tune the overall tone and feel of the amplifiers. The intense skill that the man applied to his craft is further attested to by the fact that, while other makers have lifted the lids on existing Trainwrecks and copied their circuits, any experienced Tranwreck player will tell you that none of these so-called “clones” ever quite attains the sensitivity and complexity of Fischer’s own creations.

In addition to – arguably in contrast to – their unparalleled electrical workings, Trainwrecks sported decidedly DIY-looking cabinets and cosmetics. As a case in point, check out Nancy’s polished hardwood shell and front panels, the wood-burner etched control legends and starburst motif, and the stick-on Dymo labels that tell you what’s what ’round the rear. Guitarists who were not in the know years back could be forgiven for passing one of these over as some tubehead’s basement Marshall-like project, but any player who had a shot at one for reasonable money in the late ’80s or early ’90s and didn’t bite is certainly kicking themselves now.

The first Trainwreck Liverpool rolled out the door in 1983 at a price of $650. A year later that was raised to $1,000 for either model, then through the course of the ’90s inflation took it to $1,200, then $1,600, then finally $1,800 as the cost of parts increased. Long unable to build any new amps due to a raft of illnesses, Fischer saw the price of used Trainwrecks rise to $22,000 or more during his lifetime, and in the three years since his death on December 23, 2006, good Trainwrecks have pushed past the $30,000 mark. While he was still making amps, he not only offered customers a two-week trial with a full money-back guarantee, but declared he would refund the cost of shipping both ways if a buyer wanted to return his amp. None ever did.

Shortly before his death, Fischer revised the offer. “Several years back I instituted a policy; any Trainwreck amp out there has a ‘triple-your-money-back’ original-purchase-price guarantee. So if you’ve got a Trainwreck and you don’t want it any more, send it back to me and I’ll look up the original purchase price and refund it triple.” As it happens, the “new policy” had no takers either.