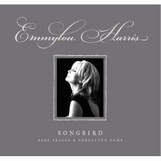 Emmylou Harris’ latest box set, Songbird, occupies a unique place among deluxe anthologies. Instead of being merely another greatest hits or an unreleased versions set, it’s a collection of personally important musical moments. Songbird grants Ms. Harris a chance to be her own critic by showing her audience which performances and collaborations were the most important in her artistic development.

In every way, Songbird qualifies as a deluxe set from its slip-cased cover with its delicate tipped-in photograph to the 200-page hard-covered book inside. My only criticism of the packaging is that it is difficult to get the CDs out of their cardboard slipcases. Once removed, the four CDs and one DVD deliver 78 songs and 10 music videos. The earliest song is a 1970 alternate version of “Clocks” from her first release, Gliding Bird. The most recent tune comes from 2006, a duet with Mark Knopfler called “Love and Happiness” by Texas songwriter Kimmie Rhodes. In between the two are songs from every period of Harris’ storied career. Disc one starts with her collaborations with Gram Parsons, as well as her first great band, which featured James Burton’s lead guitar and Rodney Crowell’s rhythm guitar and harmony vocals. Harris’ early pop-country period, which included several of her best-selling albums, such as Luxury Liner, Pieces of the Sky, Elite Hotel, and Quarter Moon in a Ten Cent Sky is under-represented on this set, with only eight selections spanning from 1975 to ’78.

This set isn’t intended as a chronological or complete anthology, but instead is a collection of special musical moments. On Songbird you’ll find fabulous examples of Harris’ best musical collaborations, including her work with Dolly Parton, Linda Ronstadt, Guy Clark, Steve Earle, and George Jones. Sound quality on these three CDs varies drastically. Sure, you can expect the earliest stuff such as “Clocks” to sound a little funky, but Harris’ voice is so pure that any recording glitches or distortion stick out in bas relief regardless of where or when the recordings were made. On “First in Line,” recorded in 1990, you can hear the distracting, grainy fur of harmonic distortion marring the sterling performances by Harris and John Starling (which is probably why it wasn’t released on Starling’s album.)

The DVD includes live performances as well as music videos, such as a live version of “Together Again” from 1975, a campy promo video of “Mr Sandman” from ’81, and a luminous live reading of “Love Hurts” with Elvis Costello from a 2006 “Live at the Grand Ol Opry” broadcast. Video quality isn’t too awful on the early performances, but don’t expect to be able to read the headstock decal on Burton’s Tele.

Of course, any Emmylou Harris fan must have this box, but it delivers such a fine overview of her career that even relatively new fans will appreciate its many virtues.


This article originally appeared in VG‘s Feb ’08 issue. All copyrights are by the author and Vintage Guitar magazine. Unauthorized replication or use is strictly prohibited.

Amy Lennard – I Need To Love