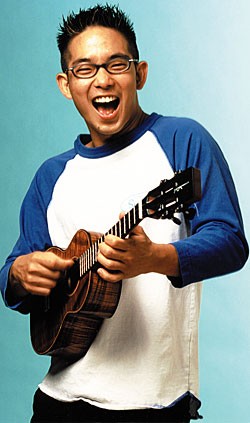 That’s the question bouncing around the country ever since a video clip of “that guy” – Jake Shimabukuro – performing an impromptu solo version of “While My Guitar Gently Weeps” began showing up on the internet.

Even though his name might not be that easy to remember (yet), he won’t remain “that guy” for long. The 27-year-old Hawaiian has been wowing audiences in Japan with his instrumental virtuosity for several years, and the spectacle of his stage shows has spawned two performance DVDs. That’s in addition to his three commercial CD releases. This Summer, he’s touring with Jimmy Buffett and Bela Fleck. But here’s the best part – Jake Shimabukuro plays the ukulele.

“I know a few chords [on the guitar], but that’s about it. On [his new album, Dragon] there’s a track where I tried to play a guitar lead. It took me the whole day to get it. It’s a completely different instrument. I had never played electric guitar before, and never used a pick, so just trying to get the right tone took forever. And I’m still not happy with it! I just don’t feel that connected with the guitar, or any other instrument, really. I’m always so inspired to play ukulele.”

And boy, can he play ukulele. His chords are as inventive as his solos are blazing, and he moves effortlessly between the two. So original is his style that he’s finding himself called the Jimi Hendrix of the uke, although the moniker makes the self-effacing Shimabukuro uncomfortable.

“Jimi Hendrix is my hero, man, along with Eddie Van Halen and Yngwie Malmsteen. I used to listen to their music when I was growing up, and I still listen to their stuff. And every time I listen, I’m so in awe of what they did for their instrument.”

The difference, of course, is that their instrument was six-string guitar, while his is the four-string tenor uke. And what Shimabukuro is doing for the instrument is garnering the attention of critics, concertgoers, and stars alike. Although the chance meeting with Jimmy Buffet that kickstarted his U.S. career this Summer almost didn’t happen.

“It’s a funny story. I was doing a radio interview in a surf shop in Waikiki, and Jimmy Buffet had stopped into that same surf shop before I got there, and he noticed that they were playing my CD. He left a hand-written note to give him a call when I got in. Then he asked if I wanted to sit in on his concert and play a couple of songs with them. At first I thought someone was playing a joke on me or something, but it turned out to be the real deal. My life hasn’t been the same since.” 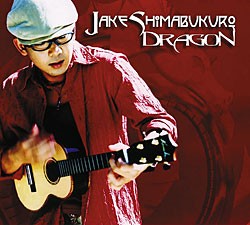 Shimabukuro plays a Kamaka tenor in a standard C6 tuning, although his use of the familiar “my dog has fleas” tuning runs contrary to the way most tenor players tune. Shimabukuro prefers the high G on the top, like a soprano, “Because it keeps that traditional, unique sound. And because I have that high G, I’m able to create voicings you wouldn’t be able to get on other stringed instruments because you have that high string on top.”

Shimabukuro’s custom-built pearl-trimmed uke is the perfect match to his style. Constructed of highly figured koa and inlaid with his initials, Shimabukuro is intensely loyal to the Kamaka organization.

“The [Kamaka] family has really been supporting me for years,” he said. “My very first ukulele was a Kamaka; I was four years old! People always ask what kind of things I ask for, but I really know nothing about making ukuleles; I don’t tell them anything, I just let them do what they want to do. And I’m more than pleased with every ukulele they make. I’ve been playing [the same one] for about three years now. The last three albums were recorded with it.”

Which is also happens to be the uke on which he played “While My Guitar Gently Weeps” in the video, another subject about which Shimabukuro is passionate.

“I love the Beatles, and I really felt a connection to George because he was such a big ukulele fan, as well. I’m a huge fan of his music, and I believe to this day that a lot of the music he wrote was ukulele-inspired. Songs like ‘While My Guitar Gently Weeps’ or ‘Something’ Even ‘Here Comes The Sun.’ Because they are such ukulele-friendly pieces, they really are! The way the chord progressions work, it’s really coming from an ukulele player’s perspective. So I’ve always enjoyed arranging his songs.”

While there aren’t any George Harrison covers on Dragon, it’s yet another ambitious undertaking for the young artist.

“I produced it myself, and it was a lot of fun. It’s 11 original tunes and one cover. It’s very different from my other stuff, and there are a lot of different techniques. I feel very personal about this album, like it’s more of an expression of myself.”

And expressing himself is just what he’s going to continue doing, right up until he’s a household name. But please, just don’t call him “that guy” anymore. Call him Jake.


This article originally appeared in VG‘s November 2005 issue. All copyrights are by the author and Vintage Guitar magazine. Unauthorized replication or use is strictly prohibited.