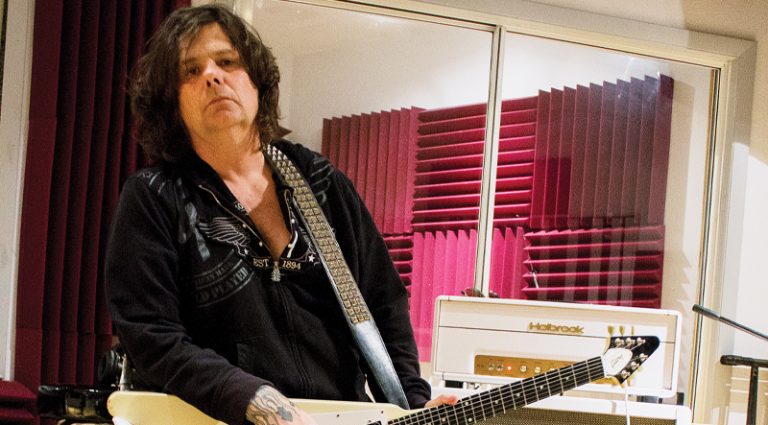 Tommy Skeoch is revered for delivering guitar tone with equal parts attitude and guttural conviction. Since his departure from Tesla in 2006, he has kept busy teaching and recorded two metal solo albums, 2007’s Freak Bucket, and Brand of Metal, from ’12. He has recently experienced a revitalized energy thanks to the self-titled debut by his new project, Skinsuit.

“The last two records, I did my own thing, just yelling and screaming over everything; I didn’t spend a lot of time on drums, songwriting or anything, I just did it and had fun. This time, I’m taking it a bit more seriously. I’ve got a drummer and a singer, and it’s more a band effort,” he said, setting up our recent discussion.

Is Skinsuit a reminder of rock’s better days?

What I wanted to do more than anything is kind of a throwback – stuff that people aren’t doing anymore. The songs have a late-’80s/early-’90s rock feel – real dynamic, real melodic, and the singer just gets it on. I also put a lot more guitar on this, so there are solos everywhere. The playing is from the gut; that’s my whole thing and it’s all over this record. It’s hard to get away from that, it’s just who I am.

I’m all about Gibson Custom Shop Historic Les Pauls and Fender Custom Shop relic Teles and Strats. That’s pretty much all I use these days. There’s a Flying V and an Explorer, and I’ve got a Charvel with a whammy bar. I hadn’t been touching that too much, but I wanted to go there on this record a little bit.

You took a unique approach to laying down the guitars.

Yeah, I did all the demos with a Line 6 Pod. I’ve been using a lot of echo and reverb with it, and it sounds really washy and crazy. So I put a little of that on the record. I’m running a Holbrook TS50 head and Holbrook cabinet with four Celestion Vintage 30s, then the Pod straight to the board. I run the amp clean with whatever amp modeler and effects I like on the Pod, then blend it in with the raw straight track from the amp.

How did your Holbrook signature amp come about?

I’ve got this ’70s Marshall 2104 I’ve used for most of my career – 2×12 combo based on a JMP 50-watt. The gain section was modified and it sounds killer. I thought, “If I can get someone to copy that, it would be diamonds.” And Holbrook did it. Out of the box, it sounded basically exactly like my Marshall. It’s got two gain stages and I like to crank them up – go for it and get nuts. It’s actually a lot more versatile than that; I can get JMP sounds, plexi sounds, and all kinds of different sounds.

I love 50-watt heads. To me, they have a lot more compression and I like the way they sound better than 100-watt heads, in general.

Which pedals do you rely on most?

I always use a Boss Super Chorus for cleaner stuff; I like turning the guitar Volume down and letting it clean up a bit. I don’t necessarily like getting a real chimey, clean sound out of the amp; that’s too clean for me. I like a little bit of sizzle.

I also use an MXR Phase 90 and a Way Huge Supa Puss. On the intro to “Other Worlds” I’m using an EarthQuaker Devices Afterneath, and it’s trippy. You can do all kinds of crazy stuff with it, so I use it with the Supa Puss and it’s just wild. Because of that pedal, I came up with the part for the intro, so I can be really inspired by pedals sometimes. They’re so expressive and it’s fun to color it up with pedals. I’m a straight-rock guy, but I like a bit of craziness every now and then.”

And this isn’t the first album on which you’ve played bass, is it?

No, I enjoy playing bass. It’s really fun to dig in with the kick drum. I’m using a Fender reissue Precision through Kustom Amps’ version of an SVT cab with eight 10s. It’s loud and sounds great; for recording, I always use an amp. You have to move some air. That’s a big part of the sound.